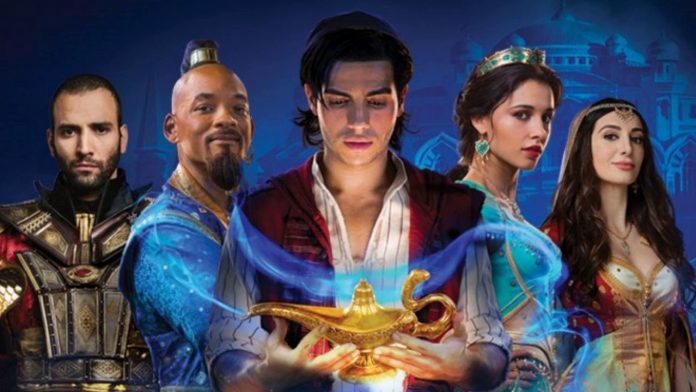 Disney’s live-action “Aladdin” is flying high with an estimated $105 million in North America during the four-day Memorial Day holiday weekend.

It’s the sixth-highest Memorial Day weekend total ever, topping the 2011 mark of $103.4 million for “The Hangover Part II.” The top total came in 2007, when “Pirates of the Caribbean: At World’s End” took in $139 million in its first four days. “Aladdin” is also dominating moviegoing internationally with $121 million in 56 markets.

“Aladdin” has outperformed Disney’s pre-opening domestic projections, which were in the $75 million to $85 million range, taking in $86.1 million in its first three days. The reboot of the original 1992 animated movie — which generated $502 million in the worldwide box office — stars Mena Massoud as Aladdin, Will Smith as the Genie, Naomi Scott as Jasmine and Marwan Kenzari as Jafar. Guy Ritchie directed “Aladdin,” produced by Dan Lin and Jonathan Eirich.

Comscore’s PostTrak general audience survey found that 67% of patrons said they would “definitely recommend” the film to their friends. Notably, 39% said their affection for the original was their primary reason for seeing the film, a high percentage that reflects moviegoers’ love for the “Aladdin” brand and the characters in the film.

“A very strong 22% said they would see the film again in theatres — much higher than the norm of 14%,” noted Paul Dergarabedian, Comscore’s senior media analyst.

Comscore estimated that total domestic business for the four-day weekend was $226 million. That was about $1.8 million shies of the total for the same frame last year, when “Solo: A Star Wars Story” launched with $103 million. The top Memorial Day weekend took place in 2013 when “Fast and Furious 6” launched and North American moviegoing totalled $314 million for the four days.

“A very solid Memorial Day weekend was led by the bigger-than-expected performance of Disney’s ‘Aladdin’ conjured up huge numbers of moviegoers looking for the perfect family-friendly treat over the extended holiday weekend,” he said.

Sony’s launch of horror-thriller “Brightburn” should pull in about $9 million for the holiday weekend to finish fifth and United Artists-Annapurna’s teen comedy “Booksmart” will open in sixth at around $8 million. Both were positioned as counter-programmers to “Aladdin” and finished slightly below forecasts.

Lionsgate’s second session of “John Wick: Chapter 3” should be runner-up with $30.5 million following its surprisingly strong opening of $56.8 million. The actioner will wind up the holiday weekend with $107 million domestically.

Disney’s fifth frame of “Avengers: Endgame” will finish third in the $22 million range, increasing its haul to about $803 million domestically by the end of Memorial Day. “Endgame” trails only “Star Wars: The Force Awakens” in domestic gross, with the space saga having grossed $936 million.

Warner Bros.’ third weekend of “Pokemon Detective Pikachu” will follow in fourth with about $17 million. The family adventure will finish the weekend at the $120 million mark in North America.

Overall moviegoing for 2019 has hit $4.34 billion as of Sunday, down 10% from the same point last year. The lag is due to a dismal performance during the first two months of this year.

“Aladdin” is the third biggest launch of 2019, following the record-setting $357 million for “Avengers: Endgame” and $153 million for “Captain Marvel.”