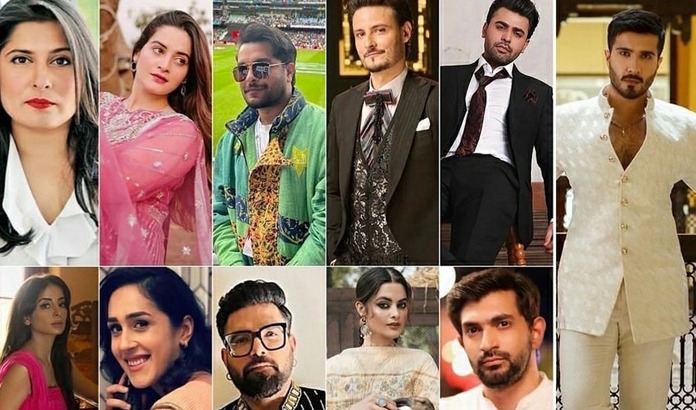 Actor Feroze Khan said on Tuesday that he has placed defamation notices against several celebrities. In response to claims of domestic violence made against him by his former wife Aliza Sultan he took this step.

As predicted, the reactions of the identified celebrities were ones of disgust. The invasion of Aiman and Minal’s privacy described. Aiman wrote a thorough description of how her privacy has violated and how stressful it is.

Sarwat Gilani claims that 10 celebrities’ attorneys would pursue Feroze Khan since he exposed their private information on social media. She published a snapshot of her phone calls list on Instagram, showing that she is getting several calls from unidentified numbers.

Meesha Shafi defended her colleagues. She promised those accused of “defamation” that “he’s going to lose in every manner in the end.”

Feroze was criticized by Yasir Hussain for disclosing his personal contact information, resulted in obtrusive calls and texts. On Instagram, Hussain posted a series of images demonstrating how his phone number has leaked. Hussain referred to Khan as a “stupid man” for his actions and published the screenshots.

Other celebrities who slams Feroze for his actions are Fahad Mirza, Farhan Saeed, Osman Khalid and others.

The legal document was first uploaded by Feroze on social media, but he then took it down and replaced it with a tweet about his legal team sending defamation notifications to anyone who made false and unfounded claims. Unfortunately, the notification had already circulated and viewed by many of his fans by the moment he took it down from his official Twitter account.

Rida Shahidhttps://hamariweb.com/
Rida Shahid is a content writer with expertise in publishing news articles with strong academic background in Political Science. She is imaginative, diligent, and well-versed in research techniques. Her essay displays her analytical style quite well. She is currently employed as English content writer at hamariweb.com.
RELATED ARTICLES
Entertainment