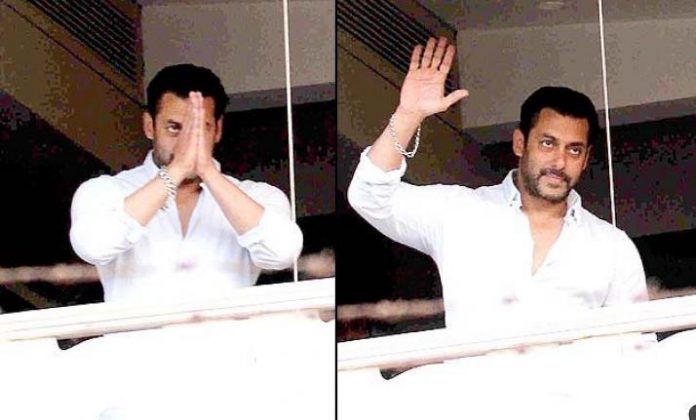 Webdesk: Salman Khan has thanked his fans for support after he was sentenced to 5 years of imprisonment in the Blackbuck poaching case verdict. Salman Khan was sentenced to a fine of 10,000 Indian rupees and 5 years to jail by Jodhpur Court of Rajasthan for poaching endangered Blackbucks during the shooting of the movie ‘Hum Saath Saath Hain’. He was accompanied by other members of the cast who were acquitted from the case after being proved innocent.

Salman Khan Spends 2 Days in Jail Before being Granted Bail

Salman Khan had to spend 2 days in Jodhpur Jail where he was not given VIP treatment for being one of the biggest celebrities in Bollywood. Salman was served the same food as the other inmates in the Jail and slept on a wooden bed on a rug; he however refused to eat the plain food provided to him by the Jail authorities. The hearing of his bail in the Blackbuck poaching case was heard after he spent 2 days in jail, where he was granted bail by the court after paying a bond of 50,000 Indian rupees.

Salman Khan Tweets to his Fans

After being granted bail in the case, he took to twitter to thank the support of his fans and fellow celebrities who defended Salman and prayed for his family. He said he has tears of gratitude towards all of his loved ones who had not lost hope in him during this harsh trial. He added, thank you for being there for me with all the love and support and that God bless them all.

Tears of gratitude . To all my loved ones who are with me and never lost hope . Thank you for being there with all the love and support . God Bless .

Many people had supported Salman Khan and his family during his time in jail which included many celebrities from Pakistan as well, who called the punishment very severe. People even gathered outside Salman’s residence to show their love for the Bollywood megastar.