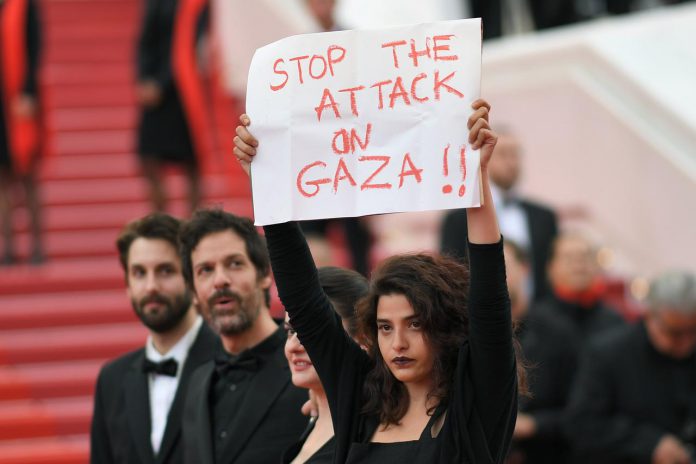 Lebanese actress Manal Issa made her presence on Cannes Red Carpet with a sign “Stop the attack on Gaza”.

Lebanese renowned star Manal Issa made a memorable appearance as she held a sign “Stop the attack on Gaza”. She utilized the platform of Cannes Red Carpet to draw the world’s attention towards Killing of Palestinians. Manal Issa was attending the premiere of the film “Solo: A Star Wars Story“.

May Odeh, the Palestinian film director and producer, said that It is disturbing that they are attending the event but their country is in bad condition. He further added that filmmakers are asking their future plans while their citizens are facing attacks from Israel. It is the first time when Palestinians have their separate pavilion at the Cannes Film Festival. However, several countries are promoting their film industry at the Cannes Film Festival.

Israel is continuously killing Palestinians after the shifting of the US Embassy to Jerusalem. In a few days, several people including women and children are killed and wounded .