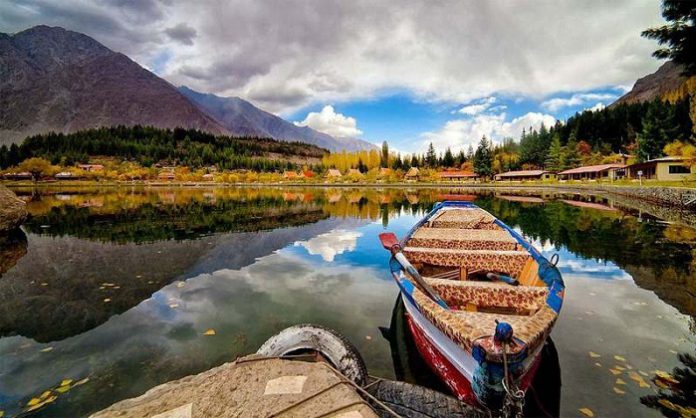 Pakistan is full of breathtaking locations and is a traveler’s paradise. For a very long time, the country’s natural beauty has been neglected due to law and order concerns but in recent years, the inflow of tourists is on the rise.

From the rugged mountains in the north to the deep seas and deserts in the south, Pakistan has something to offer for everyone. There is an abundance of natural landscapes as well as remains of some of the most ancient civilizations and many other architectural marvels. So, let’s broaden our horizons and explore some phenomenal places.

Before traveling the world, let’s discover our own country first. We still have three months left in this year and it’s about time that we start planning. If you are intelligent enough you can even search for some amazing discounts on air tickets and hotel bookings on Sastaticket.pk. Sastaticket.pk constantly introduces new and exciting travel deals for its customers to make traveling all the more affordable.

Here are 7 destinations from our list which you must visit in 2019. Your experience will be unforgettable:

Chitral is one of the most beautiful places in Pakistan and the city has a lot to offer.

It has beautiful lakes, rivers, and pleasant weather, but more than anything else it has a unique culture and history which attracts the tourists.
Situated amid the Hindukush Range which is 7,709m above sea level, Chitral is the home to ‘Kho’ people who derive their ancestry from Persian and Turkish heritage. However, Chitral remains famous throughout the world for the Kalash people who many believe to be the ancestors of Alexander the Great. The unique customs, religious rituals, and festivals of Kalash people bring a lot of tourists from around the world.

Neelum is one of the most magnificent valleys of Azaad Kashmir, and it has several brooks, freshwater streams, forests, lush green mountains, and a river. The area is also ideal for mountain tourism and fishing. Some of the places of tourist interest include Noseri dam, Karen, Kutton, Rati gali lake, Sharda and Kel.

In the extreme north of Pakistan, Skardu the central valley of Gilgit-Baltistan is an epitome of beauty, serenity, and wilderness.
Skardu is a major tourism, trekking and expedition hub in Gilgit Baltistan.
The mountainous terrain of the region, which includes four of the world’s 14 Eight-thousander peaks, attracts tourists, trekkers, and mountaineers from around the world. Some of the noteworthy attractions in Skardu are Deosai National Park, Shigar Fort, Kachura lake and Satpara lake.

Let’s take a detour from the northern areas of Pakistan to the tourist cities of the South. Bahawalpur is a city located in the Punjab province of Pakistan and was the capital of the former princely state of Bahawalpur, ruled by the Abbasi family of Nawabs until 1955. The Nawabs left a rich architectural legacy, and Bahawalpur is now known for its monuments dating from that period. The city also lies at the edge of the Cholistan Desert and hosts the famous Cholistan jeep rally. Bahawalpur is famous for its beautiful palaces which include Noor Mahal, Darbar Mahal, and Sadiq Garh Palace. Moreover, the world-famous Derawar Fort is also located in Bahawalpur. The forty bastions of Derawar are visible for many miles in the Cholistan Desert. The walls have a circumference of 1,500 meters and stand up to thirty meters high.

Contrary to the famous belief that tourist places in Pakistan are only situated in its northern part, we present you the Ranikot fort, situated in Sindh. It is the world’s largest fort with a circumference of approximately 32 KM. This fort is easily accessible from Karachi through the National Highway. Ranikot Fort is also known as The Great Wall of Sindh and is often compared to the Great wall of China. The site was nominated in 1993 by the Pakistan National Commission for UNESCO world heritage status and has since been on the tentative list of UNESCO World Heritage Sites.