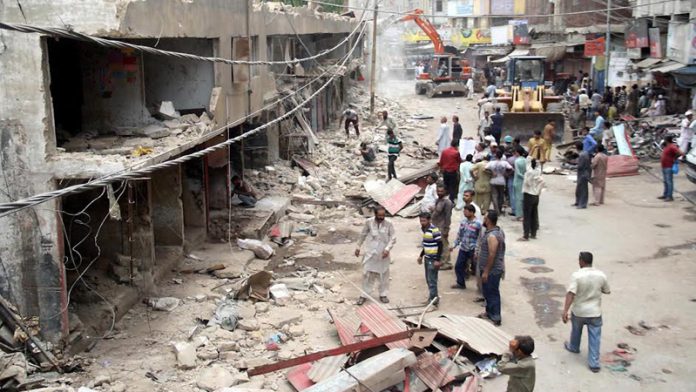 The Karachi Metropolitan Corporation authorities demolished 405 shops and offices in an anti-encroachment drive at the area surrounding Zoological Garden Karachi.

The Karachi Metropolitan Corporation (KMC) personnel will remove debris of the structures demolished during the three-day anti encroachment drive today.

KMC staff is well supported by workers of power and gas utilities to assist in anti encroachment drive.

A large contingent of police and Rangers personnel were deployed along with water cannons to disperse any adverse reaction from the shopkeepers during the anti-encroachment drive.

The shopkeepers of the area continued to protest against the anti-encroachment operation.

A roof of a shop was caved in on Saturday and scores of people got trapped under the wreckage. The eye-witnesses said the shop’s roof collapsed, when the people were taking out their valuables from the shop.

According to shopkeepers, the KMC had earlier served them notices to vacate the shops within one month but now they have abruptly slashed the deadline for removal of their shops.

According to the shopkeepers, Karachi Metropolitan Corporation rented them these shops in 1960s. Tenants of these shops are conducting businesses since then.

The city authority had recently cancelled the tenancy contracts of these shops and offices.