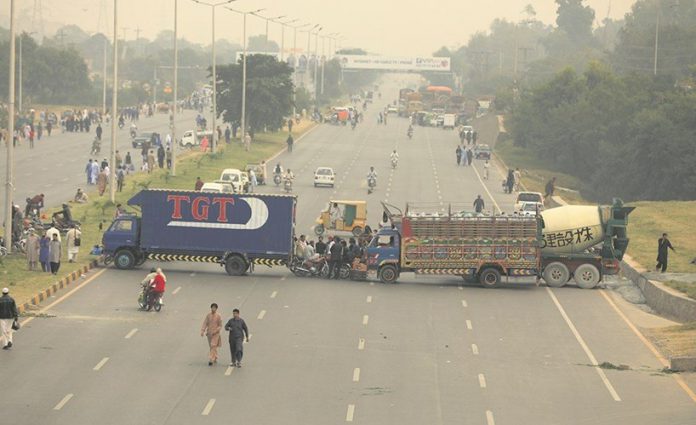 On Friday, roads in the major cities of Pakistan have been blocked by religious parties as the protests continue for a third day. The protest is against Supreme Court’s verdict acquitting Asia Bibi, a Christian woman who was previously sentenced to death on charges of blasphemy.

On Thursday, the Minister of State for Interior, Shehryar Afridi said the government is in talks with the protesters in order to bring the country-wide protests to an end. Afridi added that they will re-open the routes that are blocked by the protesters “through wisdom”.

As the protests still continue, the Tehreek-e-Taliban Pakistan (TLP) has declared a call for shutter-down strike with roads in major cities blocked. Citizens are advised to avoid the following routes for safety and inconvenience:

Karachi
Across Karachi, roads in at least 25 places have been blocked.

The road which leads to Jinnah International Airport from Star Gate has been blocked and commuters are advised to take the University Road to get to the airport.

In Hyderabad, at least four places have been blocked. These include Hyder Chowk, Abdul Qayyum Road, Bacha Khan Road and Makki Shah Road.

The entry checkpoints to Karachi are also blocked.

Other roads that lead to Muridke, Nathe Khalsa, Paka Meel and Mohlanwal are blocked.

Roads leading to Sialkot from Daska, Pasrur and Sambrial have been blocked and also blocked at various points in Gujranwala.

Even the Lahore Police have also took to Twitter to announce, “Provocative speech and unlawful use of loud speaker are not allowed, citizens may contact the police via 8330 (SMS), 0336 9221515 (Whatsapp) or 15 (call) to share such kind of information.”

Islamabad
The Interchange at Rawalpindi-Islamabad Faizabad Interchange is blocked, as well as at Dhoke Kala Khan and Tramri and Karal Chowks.

Motorways
Additionally, National Highways and Motorway Police representative revealed that all motorways have been closed for passing traffic due to the protests.

M-1 from Peshawar to Islamabad, M-2 from Islamabad to Lahore, M-3 from Pindi Bhattian to Faisalabad and M-4 from Faisalabad to Gojra have been also blocked.

Peshawar
The Ring Road and GT Road in Peshawar has been blocked and roads which lead to the motorway are also inaccessible.

Trains
According to the sources from Railways officials, Jaffar Express, which was scheduled to depart from at 6 am from Peshawar to Quetta has been delayed without any further revised time.

Other train services have also been delayed until further notice.

However, the Karachi Khyber Mail is scheduled to depart at 10 pm after a two-day delay.

Mobile phone Services Suspended
Mobile phone services have been suspended in Lahore, Islamabad, Gujranwala, and Rawalpindi from 8 am till Maghrib.