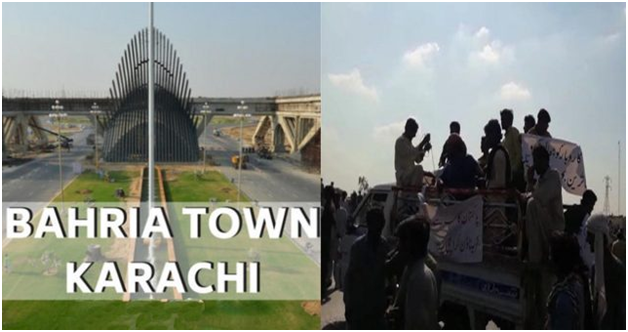 How Supreme Court finally resolves this issue will determine the future of large housing projects in Pakistan. While Govt intends to develop five million housing units it has little understanding of the complexity of land development.

Employees, residents, property owners, and other customers of Bahria Town in Karachi are protesting at various places in the city on Saturday. They are protesting against non-payment of salaries and hardships being caused because of recent Supreme Court decisions on Bahria town Karachi.

The main protest started from the main gate of Bahria Town on Indus Super Highway, but additional protests were also reported from at least two other points in the city. Protesters, appearing on TV screens, are also demanding media to end negative propaganda against the Bahria housing schemes and to tell public that how much positive work has been done by the Bahria schemes.

The protesting employees say that thousands of Bahria Town employees have not been given their salaries for the last six months and overtime for the last four months. They were joined by residents of Bahria town Karachi, property dealers and people who have bought housing plots in Bahria Town Karachi. Residents, home and plot owners and property dealers point out that most investments in Bahria towns – if not all – now don’t belong to Bahria or Malik Riaz but to “third parties” who have been investing for the past two decades. And it is these common citizens who are now suffering as a result of these government and court actions.

These third parties (Residents, Home and plot owners and property dealers) argue that schemes were advertised hundreds of times in Pakistan and abroad, payments were made through proper bank channels including huge amounts from overseas Pakistanis, huge land development and construction works including roads and energy infrastructure were laid down and if all that was not legal then where were the governments and the courts throughout this time period. “What is our crime?” and why we are being made to suffer is a question that is being raised repeatedly by these common citizens that include overseas Pakistanis to whom governments and courts look towards for making investments in Pakistan.

The immediate trigger for the protests has been the shutdown of electricity in Bahria Town Karachi as a result of government implementation of recent Supreme Court decisions; however issue has been developing for the past several months. Apex court had created an implementation bench in pursuit of its May 4, 2018 decision, in which it declared illegal the 2013 exchange of land between Malir Development Authority (MDA) and Bahria Town Karachi. Sources inform that around 18,000 acres of land were exchanged between MDA and Bahria Town, in December 2013, under the policy of consolidation which was first invoked in 1982.

Bahria paid Rs. 4 billion and 17 crore as “Consolidation Fee” to Malir Development Authority (MDA) for exchange of around 18,000 acres of scattered land, in December 2013, which it had privately acquired, between April to November 2013, from different land owners in the vicinity at the cost of more than Rs. 10 billion. (sources close to Bahria Karachi claimed that it paid around Rs. 16 billion for its own land acquisition that was later exchanged with MDA). With the help of consolidated land, Bahria Karachi was formally launched in January 2014.

Since Supreme Court has declared the exchange of land between MDA and Bahria illegal the next question is of compensation to  Malir Development Authority (MDA) or Govt of Sindh for the land that it should not have given to Bahria. And here lies the dispute. Before Bahria developed its housing scheme one acre of land in the area was between Rs. 6 to 8 lakh, as per the 2015 MDA rates. MDA revised its 2011 rates in 2015, and Bahria exchanged land in end 2013, so which rates should be applicable is also a question.

If one acre of land, in 2013, was around Rs. 6-8 lakhs, now as a result of investments by Bahria, and hundreds and thousands of third party investors which Bahria invited through its development, the cost of land can be from Rs. 30 to 40 lakhs per acre. Newspaper quoting Bahria sources cite that Bahria invested around Rs. 500 billion in development. Most of this is “third party investment” by those residents and plot owners who purchased plots from Bahria in easy installments over 2-3 years.

At the 2014 prices (MDA Rates) the total cost of 18,000 acres (land exchanged) should be around Rs. 17- 18 billion. However the current rates of Rs. 30-40 lakhs per acre it can be as high as Rs. 80-100 billion. Bahria, revealed in the court that it generated a total revenue of Rs. 623 billion from the Karachi scheme, out of which Rs. 492 billion have been received and rest is still pending. Implementation bench has to come up with a fair price for the land given to Bahria by MDA. It is not known how MDA will compensate Bahria for the land it acquired from Bahria and will it return or reimburse Bahria for Rs. 4.17 billion it had received from Bahria as “Consolidation charges”

Sensational reporting of court proceedings in newspapers and shrill comments on TV have mislead public at large and created a situation where many are happy to take positions without having any understanding of issues on ground. Real issue is how Supreme Court Implementation Bench finally settles this dispute and determines a fair compensation to MDA keeping in view the land prices in 2013. Implementation bench will have to safeguard the interests of all those common citizens and investors who purchased plots in the scheme as it will determine the future of large housing projects in Pakistan. After DHA, Bahria is the only private sector developer that has successfully undertaken large housing projects and has demonstrated a capacity to deliver quality.

PTI government intends to develop five million housing units in five years, however this needs clear policy for land acquisition, development and compensation and as the Bahria Karachi saga reveals there is no clear framework and almost all schemes in private sector, seen in last 40 years, ultimately become controversial. The only safe schemes for Pakistani common citizens and investors are thus of Defense Housing Authority (DHA) that operate beyond the domain of federal and provincial governments. The real reason is that governments don’t have intelligent transparent frameworks that can facilitate such development.

Govt has now apparently frozen bank accounts of Bahria Karachi, in pursuance of court decisions, making it impossible for the company to make financial transactions and pay its electricity dues.

Bahria Town has been unable to pay the bills and salaries owing to the fact that their accounts have been seized by the government on the Supreme Courts orders.

The protesters on Karachi streets say that more than 20,000 people are getting affected directly or indirectly. Property dealers point out that almost a million middle class families have invested into Bahria schemes across the country who have purchased plots through easy installments in last two decades since middle 1990s. Several million people now live in these housing schemes across Rawalpindi, Islamabad, Lahore and Karachi and the demoralization that is spreading in property markets as a result of court and government decisions will negatively affect property prices across the country.

Bahria Town has been unable to pay the bills and salaries owing to the fact that their accounts have been seized by the government on the Supreme Courts orders. Headed by Chief Justice of Pakistan (CJP) Mian Saqib Nisar, a five-judge larger bench had taken up petitions seeking review of the court’s May 4 judgement, which had barred the Bahria Town Karachi from selling plots or built-up apartments in the scheme it had launched in the city and directing a settlement of lands it had acquired under a swap with the Malir Development Authority (MDA). The verdict had held that the transfer of land between the MDA and Bahria Town Karachi had been illegal.