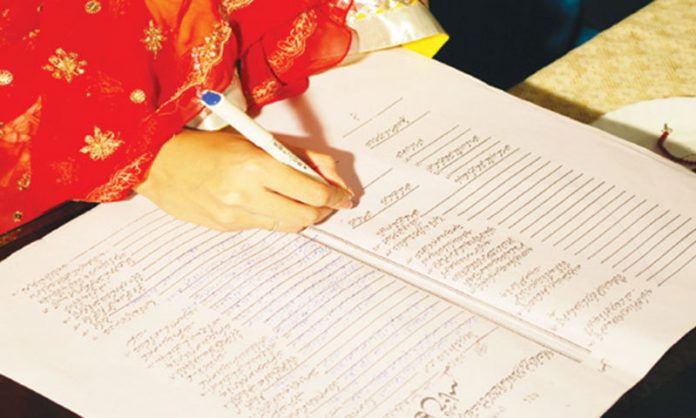 Council of Islamic Ideology (CII) composed the preliminary draft of a new comprehensive nikahnama (marriage contract) and talaqnama (divorce paper) to provide due rights of women.

CII is drafting new nikahnama and talaqnama to protect women rights. CII Chairman Dr Qibla Ayaz said that the present Nikahnama was drafted in 1960s and it is now obsolete. He further added that there is a need to bring advancement in the document to facilitate women.

The new draft will likely included the provision for brides to dissolve the contract of marriage.

According to Qibla Ayaz, CII along with the related stakeholders will try to make the provision clear for understanding. In addition, after new restrictions Nikahkhawan will not be able to delete clauses without the permission of bride to be.

Last month, it is announced in CII meeting that there will be punishment for a man who gives “triple talaq” simultaneously. He further added that both the documents (draft) were needed to be improved further.