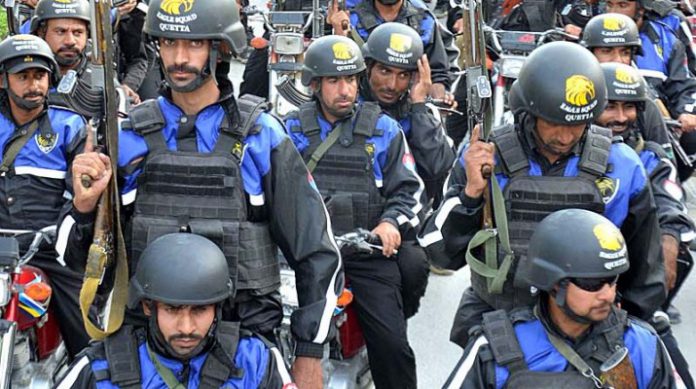 QUETTA: The Eagle Squad has started active duty in the city after terrorist attacks and targeted killings. The squad has been specially trained by the Army.

The Eagle Squad has been specially trained by the army to counter terrorist acts and targeted killings to ensure peace. The peace of the city of Quetta has been disturbed lately with attempts of suicide bombings on police stations and targeted killings of Hazara Community. The Squad is going to patrol the city on bikes to keep law and order intact in the provincial capital.

The squad, consisting of 400 officers, is patrolling the areas and is armed with latest weapons. It also has been provided with 200 bikes for patrolling and armored vehicles to conduct operations. The squad has set up check points and is already on patrol in sensitive areas of the city.

DIG Quetta, Abdul Razzaq, has informed news sources that the squad will work 8 hours a day, covering two shifts. The Eagle Squad will conduct snap checks during patrol. The squad has been given proper training by the army on how to treat citizens. The squad is also not allowed to carry phones with them either.