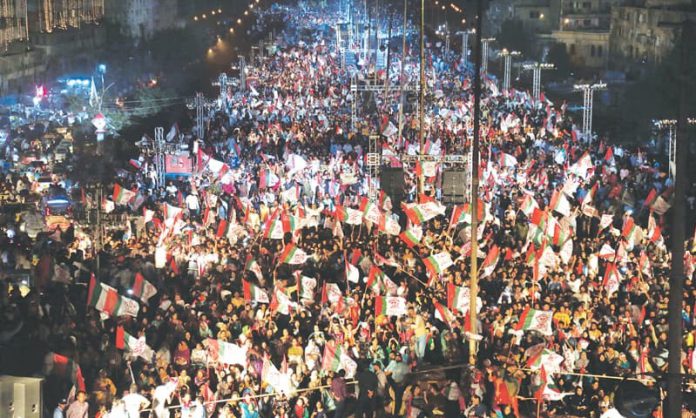 This happened a day after Pakistan Tehreek-i-Insaf staged a public gathering in the city.

The MQM-P held a public meeting on the Liaquatabad flyover in the NA-255 constituency. Convener Dr. Khalid Maqbool Siddiqui is contesting elections from here.

Pak Sar Zameen party took out rallies in various parts of the city. PSP chairman Mustafa Kamal in a rapid tour participated in every political programme before reaching the railway ground in Gulshan-i-Iqbal, the venue of the party’s public meeting.

Faisal Subzwari criticized his party’s political opponents and alleged that Pakistan Tehreek-i-Insaf chief Imran Khan had “prejudice against Karachi and the MQM”.

Accusing the Pakistan People’s Party of “incompetence and corruption”, he further said the PPP was making deals with extremists in certain constituencies.

He also took a dig on PSP when he said people of Karachi would not vote for those contesting election on the symbol of a “fish”.

He also said the MQM-P could not be stopped despite all odds.

This public gathering was the finale point of the PSP’s election campaign; all PSP contesting candidates were present in the ground.

A large number of PSP supporters also attended the event. They were holding party flags inscribed with dolphin (electoral symbol of PSP), and shouted slogans in favor of their leader Mustafa Kamal.

Mustafa Kamal said the people of Karachi would change their “watchman” on July 25 2018. He further said, “If you want a real change then vote for dolphin and get rid of thieves and looters,” he said.

He said Karachi was known for its literacy rate, but now it ranked 34th in Pakistan.

PSP leader Arshad Vohra, who still holds the office of Karachi’s deputy mayor and is contesting election from NA-254, was critical of the PTI for undermining the importance of Karachi in terms of its contribution to the collection of taxes.

He criticized the PPP-led former Sindh government for doing nothing on the K-IV water supply project during its tenure despite the fact that the project was approved when Mustafa Kamal was Karachi mayor.