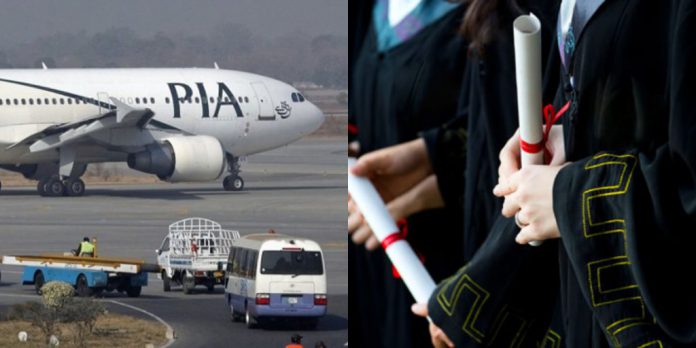 The Supreme Court has suspended the licenses of 16 pilots and 65 cabin crew members after finding them culprit in fake degree case.

The Supreme Court has wrapped up fake degree case after giving the verdict.

The chief justice had taken notice of alleged appointment of pilots holding fake qualifications in January 2018.

As the hearing of fake degree case went under way, the counsel for Civil Aviation Authority (CAA) informed the court, “Except for six degrees all others have been verified. The six degrees that have not been verified belong to those who are abroad.”

“Degrees of 16 pilots and 65 cabin crew members were fake and their licenses have been suspended,” the CAA counsel added.

At this, the chief justice remarked, “The impression is that action is being taken in haste over the court order.”

“We do not want to halt anyone’s source of income. The certificates on the basis of which the licenses of pilots and cabin crew members were suspended should be accurate,” Chief Justice added.

The counsel for CAA said, “Pilots have the right to appeal after their licenses are suspended.”

At this, a pilot present in the courtroom whose license was also suspended said, “My degree is not fake but my license was still suspended.” The chief justice then remarked, “If anyone has any issues then they should approach the relevant forum.”

Declaring that degrees of 16 pilots and 65 cabin crew members belonging to all local airlines turned out to be fake and their licenses were suspended, the court wrapped up the fake degree case.