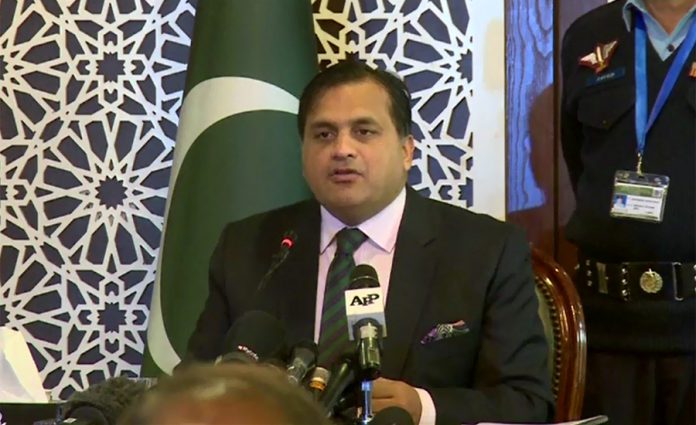 The Foreign Office on Thursday said preliminary probe by Pakistan into the Pulwama Attack after receiving Indian dossier revealed no links of any Pakistani to the attack.

Foreign Office spokesperson Dr Mohammad Faisal, in his weekly press briefing, said a 10-member team of the Federal Investigation Agency started a probe into the Pulwama Attack, in which more than 40 Indian paramilitary soldiers were killed, soon after Pakistan received the Indian dossier.

No Pakistani had any links to the Pulwama attack, according to preliminary probe into the incident, the spokesperson said. Pakistan has asked India for further details and pieces of evidence relating to the attack, he added.

Dr Faisal said the Indian dossier named more than 90 people. But there was no evidence linking Jaish-e-Mohammad chief Masood Azhar to the attack.

De-escalation has not yet happened with India in the wake of the Pulwama incident. Pakistan has repeatedly offered to hold dialogue with India for resolution of all disputes, but the Indian side has never reciprocated, the spokesperson said.

He said Pakistan has informed India that it is ready to cooperate if they have any actionable intelligence and evidence that would sustain the threshold of Pakistani courts.

Dr Faisal clarified that it is a technical issue and the appropriate forum to address it is the UNSC 1267 sanctions committee.

He regretted that the resolution has been circulated in the UN Security Council at a time when the matter was already under consideration by the 1267 committee. Such efforts to circumvent the established machinery for this purpose will only weaken the sanctions regime, he said.

When asked about a tweet by Indian External Affairs Minister Sushma Swaraj on two Hindu girls from Ghotki, Sindh, Dr Faisal termed it a “desperate electioneering ploy” by the Indian leadership.

The spokesperson also drew attention towards the ongoing human rights violations in Indian-occupied Kashmir as well as the forced conversion of Muslims in India to Hinduism. Human rights should transcend politics, he added.

Responding to a question, the spokesperson said Pakistan has taken up the issue of security of its prisoners in India with the Indian government.