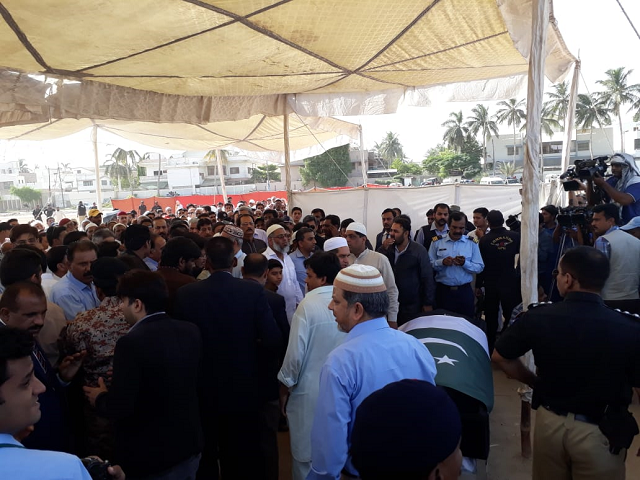 Arrangements had been made for the prayers, with tents for people to protect them from the scorching heat. White lines had been drawn on the ground to mark rows for praying. A huge quantity of people were in attendance to perform the funeral prayers of Sabika.

Special security arrangements had been made, with security personnel stationed at surrounding buildings. On the occasion after the prayers, Governor Sindh expressed his condolences to the parents of the deceased.

The body of Sabika Sheikh was to reach on Tuesday, but due to bad weather it was delayed to Today, Wednesday. The body reached in the early hours of Wednesday and funeral prayers were performed at Hakeem Saeed Ground.

The Pakistani exchange student is to be buried at Azeempura Graveyard in Shah Faisal Colony, Today.

Sabika Sheikh was a victim of Texas high school shooting, where 10 others had been killed by a student. The shooter was also a student who had brought his father’s shotgun and revolver to school to perform the killings. According to the suspect’s journal, he was going to take his own life after killing his fellow students. But when the time came he gave himself up to the authorities and could not take his life.