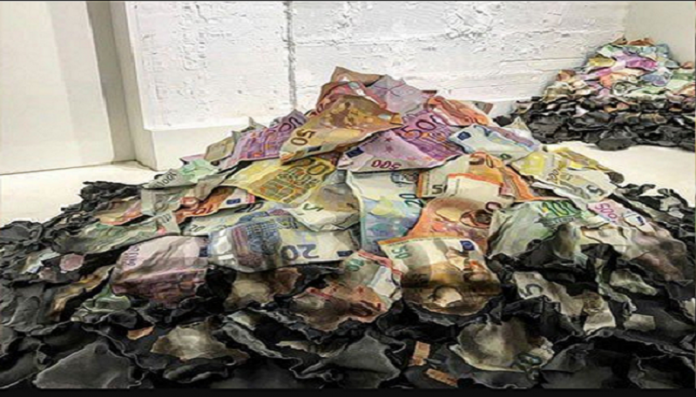 In a ongoing viral video, it is seen that the piles of burnt foreign currency at a house.

The video related to burnt foreign currency at Agha Siraj Durrani house is fake. It does not have any connection with Sindh Assembly Speaker and PPP leader.

A video gone viral over the social media which claimed that National Accountability Bureau (NAB) officials discovered the cash at Agha Siraj Durrani’s residence in Karachi, and that the politician’s wife attempted to burn the cash when the anti-corruption officials arrived to raid the house. Here is a tweet that caused the panic:

#Breaking: Hidden local and foreign currency notes are seen stacked in basement of the house of Agha Siraj Durrani, Speaker of #Sindh Assembly in DHA #Karachi. His wife is said to have tried to set fire when NAB officials arrived to raid house and family refused to open doors. pic.twitter.com/jpIy22W0ff

However, the video is actually an art installation from Madrid, Spain created by Spanish artist Alejandro Monge. The video was shot by a person who has seen “European Dream” at the Art Madrid festival last year. Monge posted this video on his own Instagram account.

It is not the first time that this video has been circulated on social media with a misleading caption to falsely link it to politicians and accused them of corruption. Previously, it spread false claims in Haiti, Russia, and also put corruption charges on Cameroon’s minister and his wife.