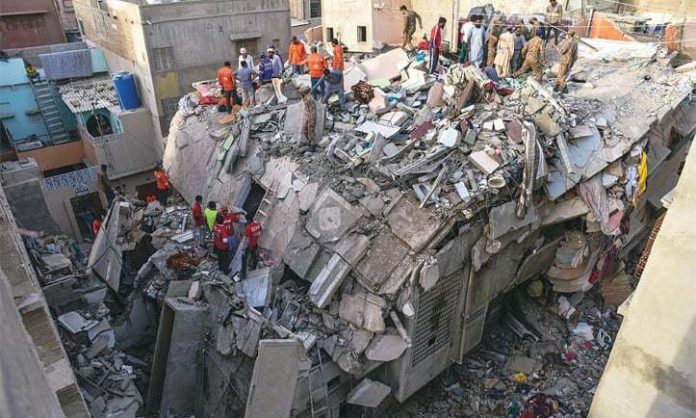 Karachi Building Collapse – Number of deaths are now reached at 18 due to the yesterday’s unfortunate incident in Golimar Karachi.

According to reports, the rescue teams had recovered seven more dead bodies from the wreckage since last night.

The rescue speed of rescue operation has been slow as they fear that there are more people stuck in the wreckage of building. And rubble has to be removed carefully as they think nearby buildings may also fall down, said by Senior Superintendent of Police (Central) Arif Aslam Rao.

Officials from the district and city governments, Pakistan Army, Sindh Rangers, police, fire brigade, Edhi foundation, Chippa Welfare and others are included in the operation team.

It is the second incident happened in the span of 30 day. Previously, in February, a ground-plus-five storey building built on 80-square-yard plot in Lyari’s Usmanabad had created breaks before tilting perilously.

Minister for Local Government Nasir Hussain Shah has certain that strict action will be taken against unlawful buildings.