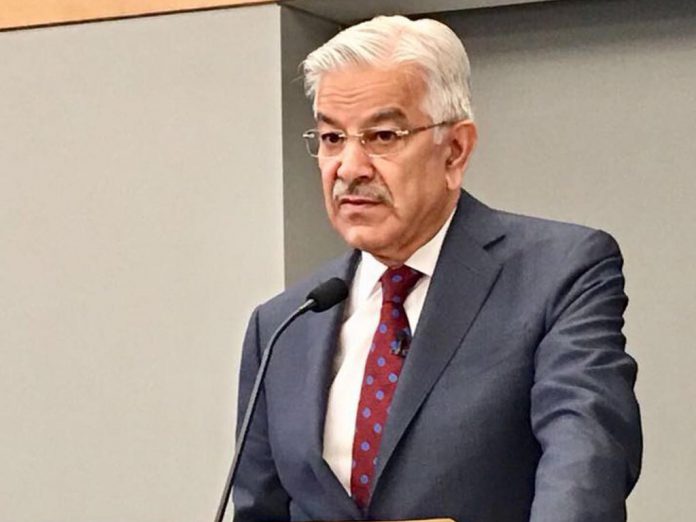 ISLAMABAD: The Islamabad High Court will announce the verdict on Khawaja Asif disqualification case today. A petition has been filed against Foreign Minister Khawaja Asif for holding an Iqama (work permit) of United Arab Emirates.

The petition has been filed by PTI Sialkot leader Usman Dar. He alleged that Khawaja Asif did not mention his foreign employment in his nomination papers. The foreign minister has denied the charge.

After hearing the argument from both sides, Justice Athar Minallah has reserved the verdict on April 10th 2018. The court also allowed both parties to submit any relevant additional documents if they have. Khawaja Asif on April 16th submitted a letter of an Abu Dhabi company where he is employed.

According to the letter, the job of Khawaja Asif with International Mechanical & Electrical Co. is flexible and does not oblige him to stay in Abu Dhabi. The company can seek his legal advice via telephone or whenever he comes to UAE. Managing Director of the company, Elias Salloum, has expressed that he is ready to come before any court in Pakistan.

The court has also issued a notice to all parties to appear before it today.

Usman Dar is Pakistan Tehreek e Insaf leader. He is considered to be the right man of Imran Khan. He is fielded by PTI during the general elections 2013 for NA-110. It is the same constituency which elected Khawaja Asif as member National Assembly.

According to the petitioner, Khawaja Asif is not entitled to hold the office of Federal Ministry under the Unlimited Term Employment Contract between him and UAE base company International Mechanical and Electrical Co (IMECO).

Khawaja Asif has been hired as a full-time employee of IMECO since July 2nd 2011. The petition also claims that he has held various positions, including legal adviser and special adviser.

The contract also claims the Foreign Minister Khawaja Asif was entitled to receive a monthly basic salary of AED 35,000 along with a monthly allowance of AED 15,000.

Khawaja Asif is still receiving the entitled salary while serving as the foreign minister of Pakistan.