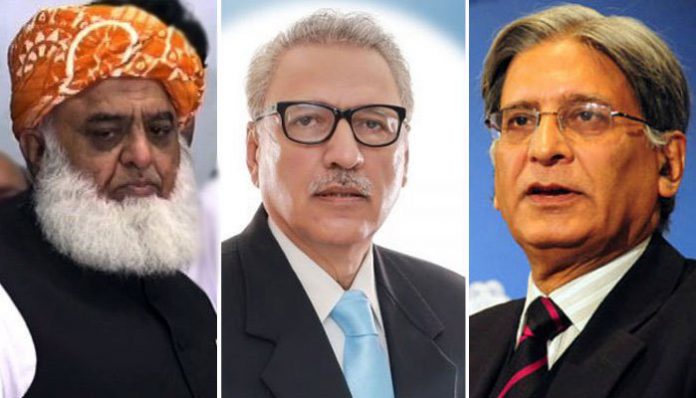 The process of vote counting is currently in process after polling for Pakistan’s President Elections ended at Parliament and four provincial assemblies at 4 pm.

Aitzaz Ahsan and Fazl ur Rehman could not cast votes for themselves. PPP leader is not a member of the Senate, where as the JUI-F chief is neither an MNA nor an MPA. Dr. Arif Alvi was the only presidential candidate who cast vote for himself.

Polling for the President election commenced at 10 am and will continue until 4 pm today.

Lawmakers are advised to bring their assembly cards, in order to cast their vote in President Election.

Chief Justice of the Islamabad High Court is presiding over the President election in the Parliament and lawmakers have started casting their votes.

Meanwhile, in the Balochistan Assembly polling is under way under the supervision of BHC CJ Tahira Safdar.

Chief Election Commissioner Sardar Raza is the returning officer for the president election.

After the completion of the polling process, presiding officers will announce details of total votes polled, while a final result of the election will be announced by the returning officer.

How is the President of Pakistan Elected?

In order to ensure equal representation, all provincial assemblies are given 65 votes each in the electoral college.

Each member of the National Assembly gets one vote as do Senators. 5.70 Punjab parliamentarians makeup 1 vote, 2.58 in Sindh, 1.90 in Khyber Pakhtunkhwa, while MPAs in Balochistan, the smallest assembly, get one vote each.

Who has a Chance to Win?

Dr. Arif Alvi candidate of PTI is considered to be the favorite candidate for winning the President Election. He is most likely to get 337.91 votes (excluding the undecided independents in each house). Maulana Fazal ur Rehman is expected to receive 199.1, while Ahsan could be picking up 115.44 votes.