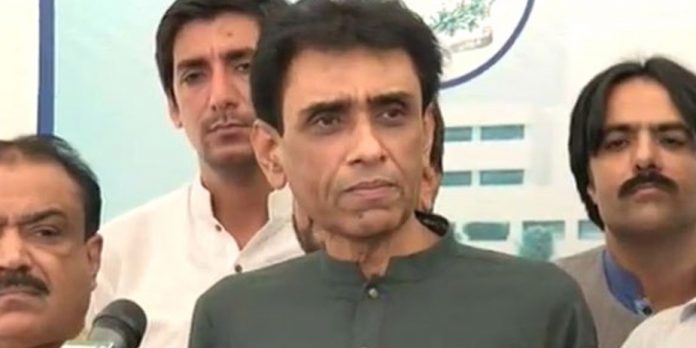 KARACHI: While addressing a media conference, MQM-P Bahadurabad Wing Leader, Khalid Maqbool, announced a rally in Liaquatabad. The public gathering in Liaquatabad is in response to the PPP rally held recently in Liaquatabad area and Bilawal’s comments.

Khalid Maqbool while talking to the media said that PPP chairman seems to have forgotten the hate the party spread. He said that PPP chanted slogan like ‘Idhar tum, Idhar Hum’ and created divisions among the people of Pakistan. Khalid said that the poison that the PPP Chairman was spewing in his speech few days ago was a disappointment. MQM-P leader added that it seems that he has forgotten the persecution of the Muhajir nation by their party.

Khalid Maqbool continued saying the PPP had broken the country in half by persecuting the Bangali brethren. He added that Bangladesh had broken up because of the ill-efforts of the PPP and its leaders. Continuing he said that PPP ousted the Muhajir nation from Sindh and made them migrate yet again. Khalid said that it was the efforts of these very Muhajir that Pakistan was built.

While claiming that PPP has nothing to take credit of, Khalid Maqbool said that the city was better off before their government. He stated that Karachi was the city of lights before PPP had come into power. He claimed MQM was the one who raised Karachi and made it one of the biggest metropolitan cities of the world. Continuing to praise the efforts of MQM he said that whenever they had put their hands on something they would turn it better.

MQM-P PIB leader Farooq Sattar has announced to set differences aside and be part of this gathering. Both the wings and their leaders are going to collaborate for this public gathering that is to be held in Liaquatabad.