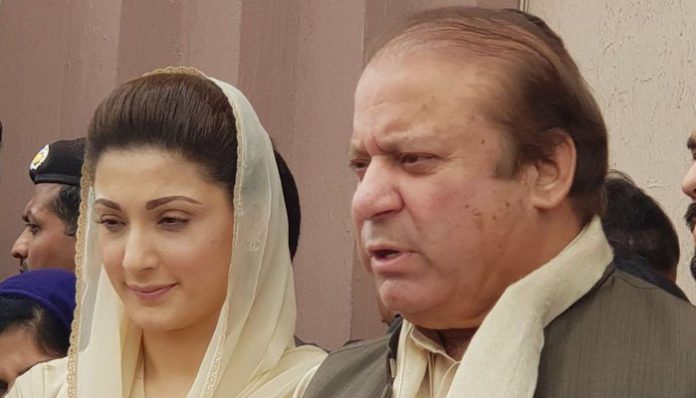 National Accountability Bureau (NAB) Lahore has been given helicopter to transport Nawaz Sharif and Maryam Nawaz from Lahore to Islamabad upon their arrival, news sources.

Former prime minister and his daughter will be airlifted to Adiala Rawalpindi from Lahore, for the purpose DG NAB Lahore has written a letter to the National Accountability Bureau (NAB) chief.

Via his letter, DG NAB Lahore requested NAB chairman to provide a helicopter for shifting the two high-profile figures, who were sentenced last week for 11 and eight years of imprisonment in the Avenfield properties reference. NAB chairman had forwarded the letter to the interim government who then provided the helicopter, the source added.

The letter also emphasized that rally will be staged in Lahore upon the arrival of the former prime minister, which will likely result in due impediments in arresting Nawaz Sharif and Maryam Nawaz.
Resultantly, law and order situation in the city may also deteriorate because of the rally, it said.

Furthermore, Nawaz and Maryam will be taken into custody the airport, and the chairman NAB will contact the Interior and Defence ministries for assigning a helicopter for the said purpose.

Sources add that NAB judge would also be given directives to be present in the administrative capacities at the prison.

Week ago Nawaz Sharif was sentenced to a period of 11 years in jail and slapped a £8 million fine (Rs1.3 billion) in the Avenfield properties reference, while his daughter Maryam was served eight years of imprisonment with a £2 million fine (Rs335 million). Moreover, Nawaz’s son-in-law Capt (retd) Safdar for one year in jail.

The NAB authorities have moved Captain (Rtd) Safdar to Adiyala after he was produced prior in a NAB court in Islamabad on Monday.