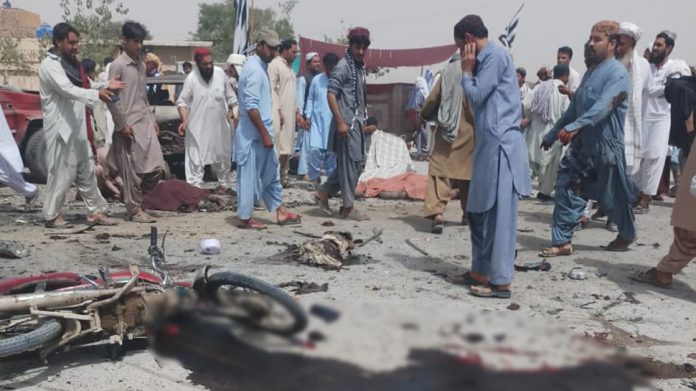 Quetta blast martyred 31 people as the police convoy hit during Pakistan Election 2018. Police confirmed that it was a suicide blast and cordoned the attack side.

The area where attack occurred lies under NA-266 and PB-31. However, it is not a first terrorist attack to sabotage Pakistan Election 2018.

On July 22, PTI candidate Sardar Ikramullah Gandapur lost his life in DI Khan Suicide Attack. On July 13, 149 people including BAP leader and candidate Siraj Raisani martyred in a blast near Mastung. In addition, around 186 people were injured. On July 10, ANP leader Haroon Bilour and 21 others died in a suicide blast at Peshawar.

Politicians are condemning the Quetta Blast

Shehbaz Sharif condemned the attack and showed his condolence with the families of martyrs.

Heart broken to learn of martyrdom of innocent people including police officials & injuries sustained by others in a terrorist attack in Quetta at a time when the people are exercising their democratic right of vote. My profound condolences to the bereaved families.

Jibran Nasir, a renowned social worker and independent candidate from NA-247 and PS-111 considered it an attack on democracy.

“15 dead in explosion in Quetta’s Eastern Bypass area”. God bless the departed and may the injured recover soon. Any attack on this day is an attack on our aspirations for a strong democracy in Pakistan. https://t.co/6H6ItDnsbo