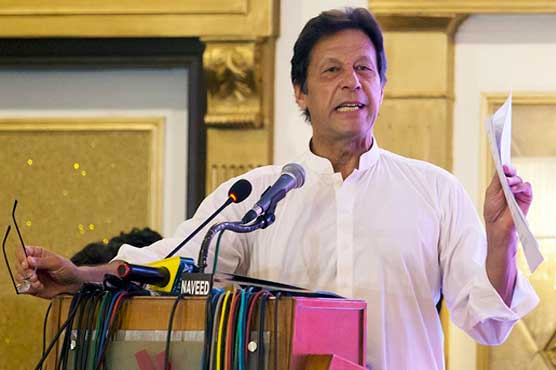 On Tuesday, the Prime Minister of Pakistan Imran Khan announced that Pakistan will be directing the International Convention on Preventing the Defamation of Religions. The Global Campaign Against Religion Defamation will be scheduled soon.

While addressing a two-day International Rahmatul-lil-Alameen (Peace Be Upon Him) Conference at the Jinnah Convention Centre in Islamabad, the Prime Minister on Tuesday said, “I have decided to make Ahmed Bilal Soofi who is well versed in international law my special envoy. He will be responsible for having this convention signed by different countries.”

Khan explained in the conference that western countries find some reason to insult the Prophet Muhammad (Peace Be Upon Him) every few years, which eventually lead to Muslims all over the world to get enraged. The PM added that negligence of this behavior will only give confidence to the enemies of Islam in the west and give them more opportunities to do it.

“Recently there was a blasphemy caricature issue in Holland. We spoke to the foreign minister and ambassador and for the first time, they took action against the blasphemous caricatures. We also raised this issue in the OIC and said all Muslim countries should tell the West about the love we have for Prophet Muhammad (Peace Be Upon Him). This issue was also raised in the United Nations for the first time by our foreign minister,” he said.

The prime minister also urged about the residents of Pakistan and Muslims abroad to learn more about the Prophet Muhammad’s (Peace Be Upon Him) life and teachings in order to become better people.

“It is our country’s misfortune that despite having been created in the name of Islam, some [elements] have [hijacked] the religion of mercy. They claim to be the safe-keepers of our religion, but their acts hurt us, hurt our children,” the premier further added.

Prime Minister Khan said that it is quite important for universities to highlight the importance of talking about the life of Prophet Muhammad (Peace Be Upon Him) so that the younger generation learn more about his life and learn from it.

“Children should be taught about [the importance of] character, about how to become better human beings. Pakistan will become a great nation one day, but it will only become so when we change ourselves…We will change our destiny by changing our character. The ideal character for us is Prophet Muhammad (Peace Be Upon Him),” he continued.

More than 2,500 people, including parliamentarians, ambassadors, ulema, scholars, students of religious seminaries, universities, deans of universities and representatives of chambers of commerce and industry are scheduled to attend the conference. As well as religious scholars from all over the Muslim world including Iraq, Iran and Saudi Arabia.

The prizes will be gifted to 21 authors for writing books on Seerat and Na’at and to 32 scholars for their research papers on Seerat. A total of 53 authors will be rewarded in nine categories of Seerat and Naat.

President Dr Arif Alvi will also be there to see over the closing session of the conference.