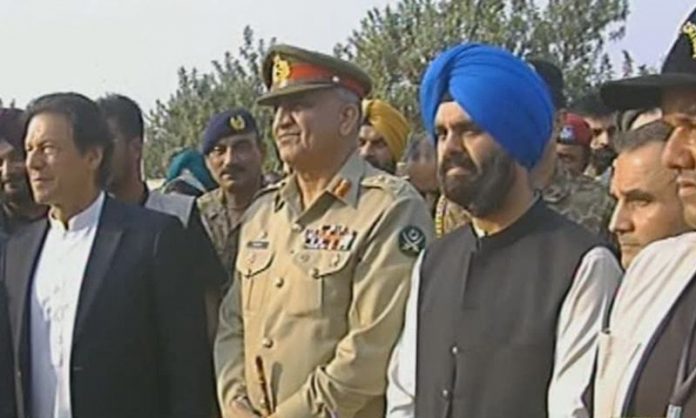 In his tweet, the Spokesperson of the Foreign Office Dr Muhammad Faisal said, “The world comes together for the #PakistanKartarpurSpirit – diplomats attending the groundbreaking ceremony.”

The world comes together for the #Pakistankartarpurspirit – diplomats attending the groundbreaking ceremony by PM #ImranKhan#Babagurunanak#Peacecorridor pic.twitter.com/PYTcsIDr1w

Former Indian cricketer-turned-politician Navjot Singh Sidhu on Tuesday led a delegation of his country to attend the groundbreaking ceremony on Pakistan’s invitation.

The Indian delegation comprising Minister for Food Harsimrat Kaur Badal, Minister for Housing Hardeep S Puri and Sidhu reached Lahore through the Wagah Border crossing where they were received by officials of the Punjab Rangers.

Speaking to journalists upon crossing the Wagah Border, Sidhu thanked PM Imran for inviting him to the groundbreaking ceremony. “The seed that Imran Khan sowed three months ago has become a tree now and me and 120 million Sikhs could not be happier,” he said.

While Indian Minister for External Affairs Sushma Swaraj declined to attend the groundbreaking, she thanked Foreign Minister Shah Mehmood Qureshi for the invitation.

The proposal to construct the corridor providing visa-free access to Sikh pilgrims was renewed by Army Chief General Qamar Javed Bajwa in August this year.

Pakistan will build the corridor from the Indian border to the Gurdwara Darbar Sahib in Kartarpur while the other part from Dera Baba Nanak in Indian Punjab’s Gurdaspur district up to the border will be constructed by India.

Watch the live coverage of Ground-breaking of Kartarpur corridor: