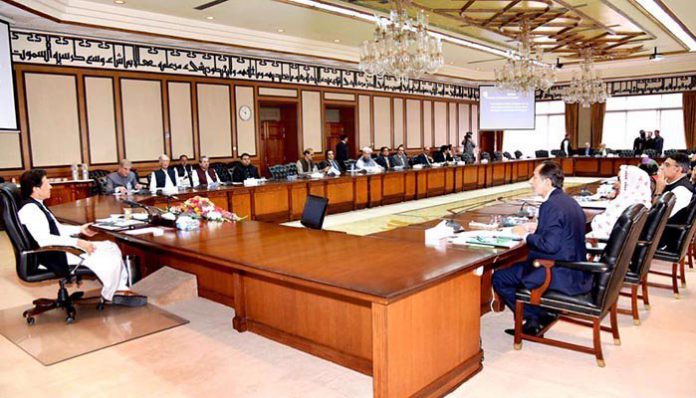 The federal cabinet is reviewing a seven-point agenda and important decisions are expected to be taken during the meeting being headed by PM Imran.

The 7-point agenda of the cabinet meeting comprise of:

4. Special audit of mass transport system in the country

5. Massive tree plantation in the country

6. Shift to six working days in a week for government offices

7. Launch of a major cleanliness drive in the country

Moreover, the approval for disbanding of Capital Administration and Development Division (CADD) is likely to be given at the federal cabinet meeting.

Institutions under CADD would be given to the cabinet division. Federal government’s administrative unit that oversees Islamabad’s educational and health institutions, will be given to Adviser to Prime Minister on Parliamentary Affairs Babar Awan.

CADD was formed in 2011 after the devolution of over 20 ministries to all four units through 18th Constitutional Amendment with an aim to oversee the Islamabad Capital Territory’s health, population, educational, and social welfare organisations.

Initially, it got the control of 22 organisations related to ICT but later, the capital’s social welfare and child welfare development, FG Polytechnic Institute of Women, the departments of libraries, archaeology and museums, population welfare, Zakat and Ushr, the training and education and rehabilitation of disabled and charitable endowment were also included in it.

Some organisations were later taken away by powerful divisions from it despite being ICT-only. Some of the renowned among them include district administration, which is currently answerable to interior ministry.

Paradoxically, only few CADD employees are understood to be drawing salary and fringe benefits from the health ministry’s foreign-funded projects as well.