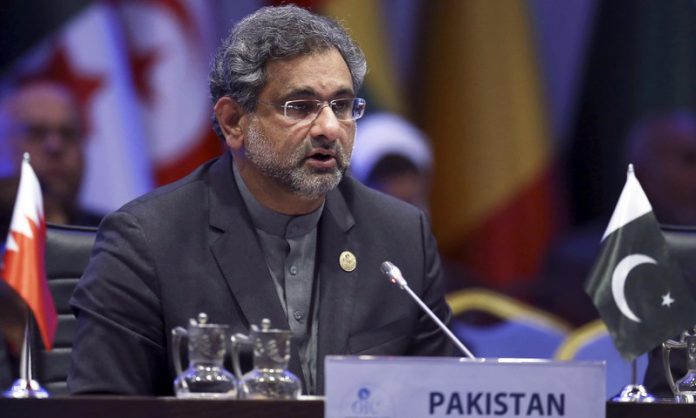 ISTANBUL: PM Khaqan Abbasi said during an OIC summit on Friday that Pakistan condemns the Israeli brutality. He added that an independent and transparent investigation was needed into crimes carried out against Palestinians.

An extraordinary summit of the OIC was called regarding the recent massacre of Palestinians by Israeli troops. At the summit of the Organization of Islamic Cooperation (OIC), PM Khaqan Abbasi promised support for Palestine. He said that Islamabad stands fast to support an independent Palestine.

In his statement to OIC PM Abbasi also condemned the US’s move to shift its embassy in Israel from Tel Aviv to Jerusalem. He said that it warranted unwanted protests from the Palestinian people.

PM Khaqan Abbasi said that the United Nations Security Council (UNSC) needs to work to have its strategic resolutions implemented. He said  its specially in the case of Palestine-Israel dispute to put the barbaric violence end.

Pakistani premiere arrived to Istanbul earlier on Friday to lead Pakistani delegation at the OIC Summit. The summit is being hosted by Turkey to discuss the grave situation in Gaza, Palestine.

Khurram Dastgir Khan, the minister for foreign affairs and defence was also present with PM Abbasi along with other government officials.

The extraordinary meeting was summoned by Turkish President Recep Tayyip Erdogan. He used his charge as the chair of the OIC summit to call on this meeting. The meeting’s major agenda is the latest incidents of violence on the Gaza strip. On Monday more than 60 civilians were mercilessly killed by the occupying Israeli forces. More than 2400 people including women, children, and elderly sustained injuries.