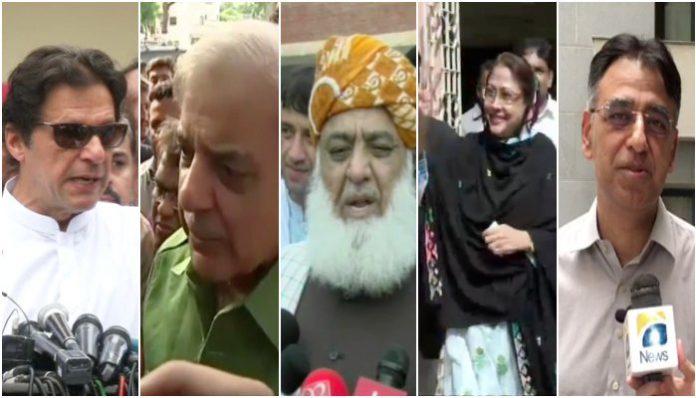 Politicians voted as electoral polling commenced across Pakistan at 8am today.

Pakistan Muslim League-Nawaz president Shehbaz Sharif cast his vote in Model Town, Lahore. He urged the masses to vote for PML-N to change the destiny of the country.

He further said, “Today will be the day PML-N will emerge victorious [Insha’Allah]. Majority of Pakistanis want to vote for PML-N.”

Shehbaz Sharif also vowed to continue the working for betterment of education, health, services, and to build Diamer-Bhasha Dam.

Politicians from prominent parties began casting their votes as polling commenced across Pakistan at 8am today.

“Come out of your houses and vote. Change won’t happen if you don’t vote. If you want to change your future and your children’s future, then come out and vote.”

Pakistan People’s party chairman Bilawal Bhutto Zardari cast his ballot in NA-200 constituency of Larkana. He further condemned the deadly blast outside a Quetta polling station and another at a PPP election camp in Larkana.

Bilawal expressed sympathy and solidarity with those who lost their loved ones in the blast, and urged the nation to defeat the menace of terrorism through the power of their votes.

JUI leader Maulana Fazl-ur-Rehman cast his vote in NA-238 Dera Ismail Khan. He said, “Your vote is a responsibility, it is important to exercise your right to vote.”