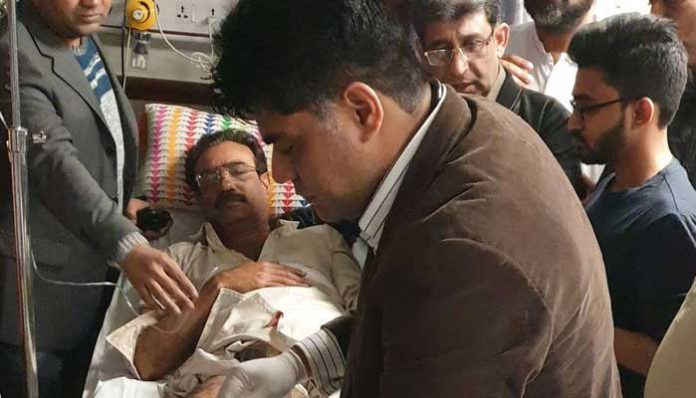 Pakistan Tehreek-e-Insaf or PTI lawmaker Ramzan Ghanchi was injured as he shot over the dispute related to water.

PTI MPA Ramzan Ghanchi shot at Old Haji Camp neighbourhood in Karachi over water dispute. However, a member of the Sindh Assembly from PTI received the bullet in his leg and later shifted to the Civil Hospital.

Muqaddas Haider, Senior Superintendent of Police City, revealed that Ramzan Ghanchi was shot over the water dispute, but he is now out of danger. He further added that suspects Suleman Usman Soomro and Ali Soomro are taken into custody. However, Suleman Usman Soomro is the president of the Karachi Timber Merchants Group or KTMG.

The federal minister for maritime affairs, PTI Ali Haider Zaidi, condemned the incident. He said that he strongly condemn the attack on PTI MPA and these tactics cannot stop them from achieving their targets.

Strongly condemn the cowardly attack on PTI MPA Ramzan Ghanchi.
These 3rd rate lousy tactics wont deter us from achieving our targets…which are to Inshallah hold accountable all those whove robbed our great country & put Pakistan on the path of economic recovery

Another PTI MNA, Aftab Hussain Siddiqui, said Ramzan Ghanchi is in their prayers and thoughts during his recovery time.

Strongly condemn the attack on PTI MPA Ramzan Ghanchi. Justice will be done & done swiftly the perpetrators of this incident would face the most severe punishment.

Mr Ramzan Ghanchi is in our thoughts & prayers during his time of recovery. May Allah give him health.