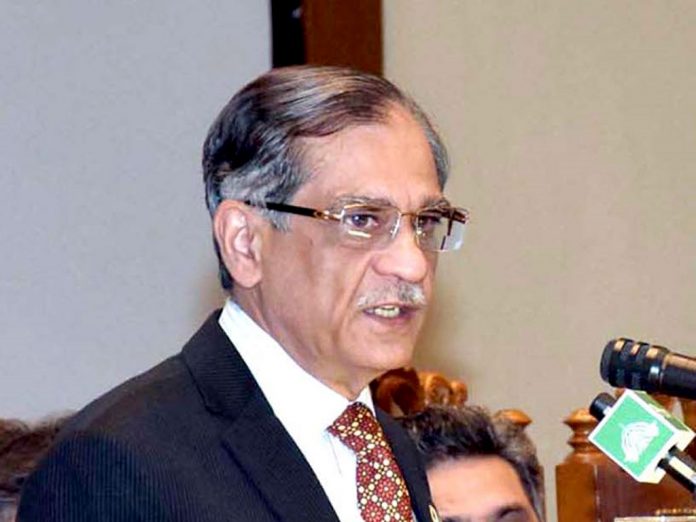 CJP Justice Mian Saqib Nisar suggested the idea of re-imposition of tax on prepaid mobile phone cards to collect funds for the construction of Diamer-Bhasha and Mohmand Dams.

Addressing a dam fundraising ceremony hosted by UK Pakistan Chamber of Commerce and Industry in London, the Chief Justice said, “It will not be appropriate to impose taxes to collect funds for the construction of dams, however, we had earlier suspended the withholding tax on prepaid mobile phone cards by service providers and learnt that through this Rs 3 billion were saved per month.”

“If the nation allows, then we will re-impose the tax on prepaid mobile phone cards and collect money for the dam fund,” he added.

Justice Saqib Nisar urged the nation to put forth their viewpoints on his proposal. “The nation should apprise us of their thoughts on this proposal,” he said.

Terming not constructing dams earlier as criminal negligence, the chief justice of Pakistan said, “A dam needs to be constructed on every inch of Indus River.”

Further, Justice Saqib Nisar expressed hope that “one day all four provinces will be in agreement over the construction of Kalabagh Dam”.

“Karachi’s water crisis made me realise how crucial this water issue is,” he further added. “Tanker mafia and some others have been controlling the water supply in Karachi and in Lahore and Quetta the level of underground water is decreasing,” Justice Saqib Nisar asserted.

Stating that he wants to secure the future of the next generations, Justice Saqib Nisar said, “The construction of dams is no longer only Pakistan’s campaign but humanity’s.”

The chief justice once again reassured that he will safeguard every penny donated to the dam fund and that he will “leave the nation’s money in safe hands” before he retires. “I will make a company to ensure this,” he added.

“These dam funds are a loan from the nation and I will hand them over to a trustworthy man before leaving.”

Justice Saqib Nisar further thanked the government and those who have contributed to the dam fund.

£2.3 million in donations has been raised for dams by renowned media group Geo in Live Telethon. This is the biggest ever amount raised since the start of the chief judge’s appeal for dam construction.

The chief justice is currently visiting the United Kingdom to raise funds for the construction of Diamer-Bhasha and Mohmand Dams.