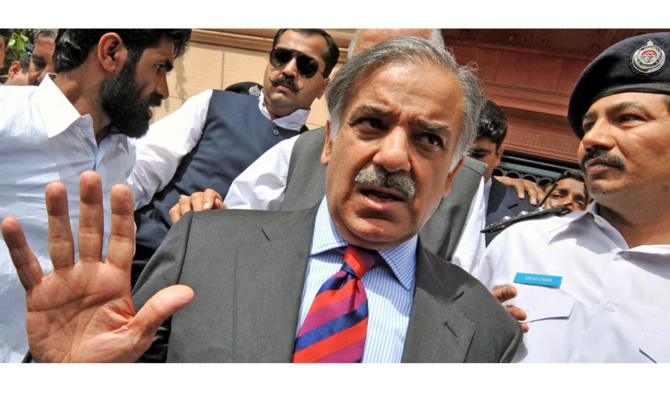 Pakistan Muslim League-Nawaz President Shehbaz Sharif will be presented before an accountability court on Saturday.

Shehbaz Sharif was arrested by the National Accountability Bureau in the Ashiana Iqbal Housing scheme on Friday. He will be produced before the accountability court Judge Najmul Hasan.

Shehbaz Sharif will be represented by Azam Nazeer Tarar and Amjad Pervez.

Moreover, Shehbaz Sharif’s sons, Hamza Shehbaz and Salman Shehbaz, will be present in court for the hearing today.

Police and anti riot force will be deployed around the accountability court today ahead of Shehbaz Sharif’s appearance. Roads leading to court are also blocked.

No irrelevant person and media coverage is allowed inside the accountability court.

Huge crowd of PML-N workers have started gathering outside the accountability court and have been chanting slogans in favour of party president Shehbaz Sharif.

Shehbaz Sharif was arrested in the Punjab Saaf Pani Company case when he appeared before NAB to record his statement on October 5.

According to sources, Shehbaz Sharif was arrested after Fawad Hasan Fawad, the implementation secretary told NAB that he carried out corruption activities in projects in Punjab on orders from Shehbaz Sharif, who was the chief minister that time. NAB had also received information from the laptop of Fawad Hasan Fawad from which data was retrieved after his arrest.

In the investigation that followed, Fawad Hasan Fawad and Shehbaz Sharif appeared together, during which Shehbaz Sharif said he would bring proof. Subsequently, NAB granted time to Shehbaz Sharif to gather proof, but he could not produce anything. Therefore, NAB summoned him today in the Saaf Pani Company case, which is one of the 56 companies being investigated.

However, Shehbaz Sharif was arrested for alleged corruption in Ashiana Iqbal Housing Scheme case. Former Railways Minister Khawaja Saad Rafique and his brother Khawaja Salman Rafique are also involved in this case and have been summoned on October 16.

Will Not Accept Revenge in Name of Accountability: Marriyum Aurangzeb

The verdict of PML-N spokesperson Marriyum Aurangzeb is also circulating in regard to this case. She said Shehbaz Sharif’s arrest is the worst form of political victimization.

She further said, “He was asked to appear before NAB and record his statement in the Saaf Pani Company case but was arrested in Ashiana Iqbal Housing Scheme case.”

She insisted that the case against PML President is totally baseless, as not even Rs 1 corruption could be proved against him.

Stating that PTI is resorting to such tactics as they could not “defeat PML-N in the political arena”, Aurangzeb said, “We will not accept revenge in the name of accountability.”

The inquiry conducted so far reveals sufficient evidence to prove the involvement of Shehbaz Sharif “in the commission of offences as defined under section 9(a) and Schedule of the National Accountability Bureau 1999.

The inquiry conducted states that Shehbaz Sharif as the chief minister of Punjab had unlawfully assumed powers of Board of Directors of Punjab Land and Development Company, misused his authority and acted in connivance with Fawad Hassan Fawad who at the time was Secretary Implementation to CM Punjab and others. Contracts awarded to M/s Ch. A Latif and sons for the development and infrastructure of Ashiana Iqbal Housing Project were illegally cancelled.

On October 21, 2014 he illegally directed PLDC to entrust project of Ashiana Iqbal Punjab to LDA.

This decision of Shehbaz Sharif was illegal as PLDC was the company which was established for undertaking such housing projects. Shehbaz Sharif is accused of illegally transferring this project to LDA, which was headed by his close aide Ahad Khan Cheema.

Shehbaz Sharif is also accused of working in connivance with other accused in the case and directed LDA to undertake Ashiana Iqbal Project under Public Private Partnership mode.