The targeted suicide attack on a police truck injured 27 people 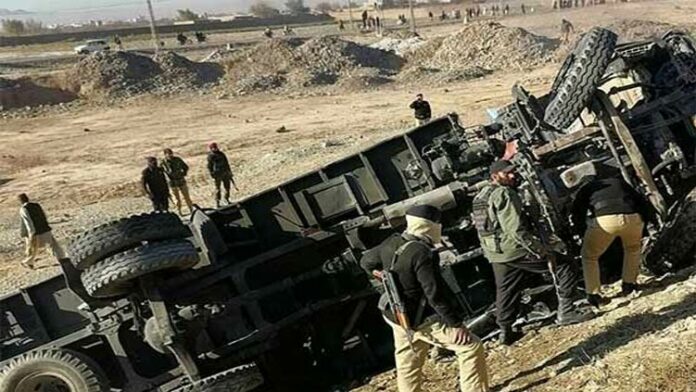 The death toll has increased from the suicide attack in Quetta. As per reports, at least two people killed. While 27 are injured including 23 police officers.

The law enforcement agencies reported that this was a targeted suicide attack as we have found the remainings of suicide bomber in the crime area. Military forces and rescue teams rushed towards the explosion site as soon as the blast happened. Injured people taken to nearby hospitals

The targeted suicide attack on a police truck injured 27 people while 2 reported dead. This attack happens days after a month-long ceasefire of Tehreek-e-Taliban Pakistan (TTP).

The Deputy Inspector of Quetta General Ghulam Azfar Mahesar confirmed the explosion as a suicide attack as they found the body parts of the bomber on the crime scene. DIG Mahesar said the policeman martyred by crushing under the truck when it fell into a ravine due to an explosion. Around 20 policemen and 4 civilians are injured, he added.

As per DIG, around 20 to 25 kilograms of explosives used in the blast. Three vehicles including a police truck damaged as a result of this massive blast. The police truck was moving to give security for the polio team.

President of Pakistan Arif Alvi condemn the attack and prayed for the martyrs and recovery of the injured. Meanwhile, the Prime Minister of Pakistan Shehbaz Sharif convicted the suicide attack that was targeted toward a police truck. He ordered to take immediate action on this blast.