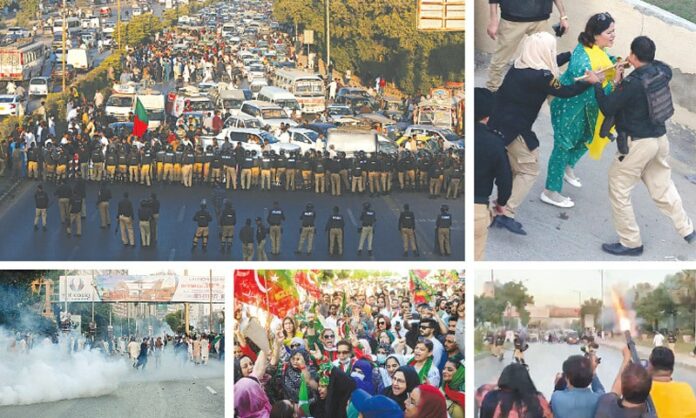 In a failed assassination attempt on the PTI chairman, Imran Khan on Thursday called for several protests in the country. The retaliation to the failed assassination, protestors have blocked roads, chanted slogans against the army, and pulled rallies.

In one of the protests on Friday, police, and supporters exchanged fierce clashes.  Police utilized gas shelling and baton charge on workers trying to enter ‘Red Zone.  The police arrested various workers gathering outside the Karachi Press Club.

As per police statement, women are release while man in custody. On the second day of the assassination, Bilal Ghaffar PTI Karachi President asked the supporters in a video message to gather outside the Shahrah E Faisal near the Nursery stop.

All the workers and party leaders assembled at the Insaf House where speeches were delivered and called for country-wide peaceful protests. Right after the speech, protestors gathered at the main Shahrah e Faisal blocking a traffic jam. The talks between the police and PTI workers failed miserably. At Regent Plaza, Karachi the situation turned violent when police fired tear gas and used batons including women. In the aggressive clashes, injured Raja Azhar a PTI MPA by a shell. The authorities have justified their action for PTI to defy the laws.

Asad Raza SSP said that the PTI workers were trying to enter the Red Zone. Raza added they repeatedly told to not block the Red Zone area attracting immense roadblocks. The PTI workers blamed PPP for using police force to dissent the voices.  The workers object that the aggressive force by the PPP government does not spare women activists.