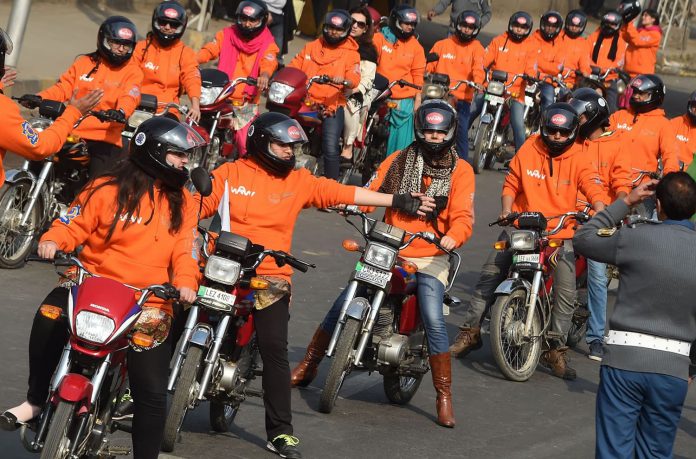 LAHORE: Through a project of CM Punjab’s Strategic Reform Unit (SRU), 700 bikes were given to women under ‘Women on Wheels’ Scheme.

Around 60 women out of 700 who had received the bikes also launched a rally riding their bikes around Lahore. The women, which constituted of students, working women and housewives, took out the rally. In a ceremony, keys to 700 bikes were handed out to women to give them empowerment. The Women on Wheels scheme by the government was welcomed by many women’s right activists.

The rally was held on Sunday, which was also mother’s day.

Around 700 women have been handed over keys of motorcycles under a project of CM’s Strategic Reforms Unit (SRU) at an event held in #Lahore. After key-handover ceremony, a total of 60 motorcyclists, including students, working women & housewives, took out a rally. #WomenOnWheels pic.twitter.com/PqER8ts3ww

The Women on Wheels bikes sport a pink color to give them a unique look suitable to that of the women riders.

Nighat Dad one of the foremost women’s right activist said that we are to see more women on bikes in coming days. She added this move is not only a freedom of mobility but also a new found sense of freedom of movement inside women.

Aj buhat khush noon! Women are reclaiming their roads now. It’s not only a freedom of physical mobility but also a new found sense of freedom of movement. #womenOnWheels #WOW #HamariSadkain #ItsABeginning pic.twitter.com/oMCECtTnjN

Meesha Shafi the actress was also present on the moment of the rally. She also participated in the rally by riding behind a women rider.

Some women claimed motorcycle to be a very wonderful mode of transport. While others said that this be quite beneficial to them as they will get freedom of mobility.

Social media is bursting with the Hashtag #WomenonWheels and #WOW after Sunday’s women rally across Lahore.