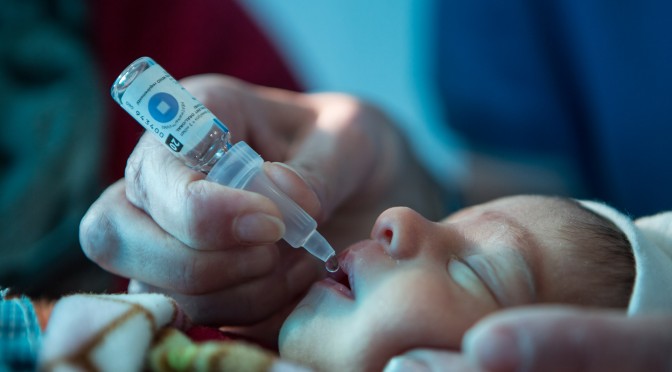 Prime Minister Imran Khan vows to eradicate polio virus from Pakistan on the eve of World Polio Day on Wednesday.

Pakistan is one of the most affected countries in the world along with Afghanistan and Nigeria, that suffers from endemic polio.

In his message on World Polio Day, being observed today, October 24, PM Imran Khan tweeted: “Our government is fully committed to ending polio in Pakistan.

On #WorldPolioDay, I am confident, together with our people, we will achieve a safer, healthier and polio-free Pakistan for our children.”

Our government is fully committed to ending polio in Pakistan. On #WorldPolioDay, I am confident, together with our people, we will achieve a safer, healthier and polio-free Pakistan for our children.

Polio is a crippling childhood disease caused by the polio virus, and preventable through immunization.

A country must have no polio cases for three consecutive years in order to be considered to have eradicated polio by the World Health Organisation.

Babar Atta, focal person to the prime minister on polio eradication, shared the PTI government’s commitment to eliminate the polio virus and the challenges involved in the process.

He said one of the reasons behind the spread of the polio virus is travel.

Taking Afghanistan as an example, he noted that 16 polio cases have been reported in the country this year. Because Pakistan shares a border with Afghanistan, it can be challenging to prevent the spread of the polio virus.

Babar Atta requested all parents to ensure their children are vaccinated against polio, to achieve a polio-free Pakistan.

Affecting mostly children under the age of five, polio — which has no cure and can only be prevented by giving a child multiple vaccine doses — can lead to irreversible paralysis.