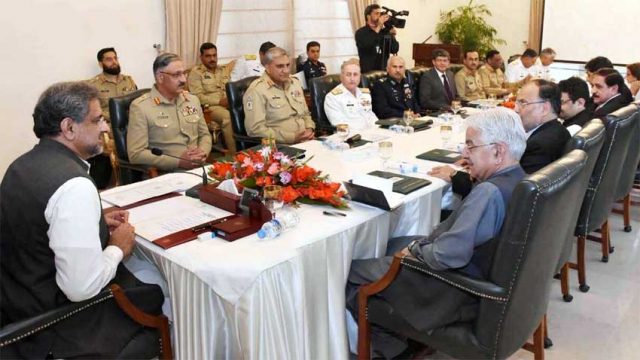 The National Security Committee will highlight the brutalities and violations of human rights carried by Indian forces in Occupied Kashmir on international forums. The decision took place on 20th meeting of the National Security Committee chaired by Prime Minister Shahid Khaqan Abbasi in Islamabad. Chiefs of all three services are among the attendees.

The National Security Committee further praised the extraordinary bravery and courage of Kashmiri people in the face of Indian brutalities.

The Committee restated that Pakistan will continue to support the Kashmir on their political, diplomatic and moral stance. Right of freedom is the primary and legitimate right of Kashmiris, and they are well supported by various US Resolution.

The National Security Committee decided to raise and highlight the issue of extraordinary Indian brutalities. The Committee reviewed the broader regional situation and expressed that Pakistan will continue to play their role in establishing peace in the region.