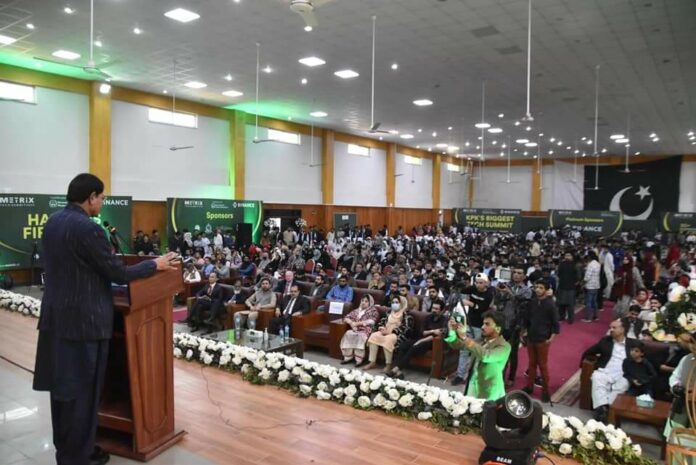 Metrix organized the biggest three-day Tech Summit of 2022 in collaboration with KPK Government and Hazara University at the varsity from Friday Oct 28th, 2022 to Sunday Oct 30th, 2022 to emphasize the importance of Web3, Blockchain, and other unconventional technologies that can revamp businesses and boost economic growth of the country.

The summit was co-organized by Hazara University and the Government of Khyber Pakhtunkhwa and was attended by tech enthusiasts including government officials, private companies, entrepreneurs, and students. It was inaugurated by the Governor of Khyber Pakhtunkhwa, Mushtaq Ahmed Ghani, who shared, ‘globalization has completely revamped work due to the adoption of emerging technologies. It is crucial that our youth understand these new advancements and use them for the betterment of society.’

MNA &Preliminary Secretary SalehMuhammad Khan also attended the event and praised the organizers for brining such like-minded audience under a single roof.

Metrix Tech Summit had 50 speakers, 50 exhibitors, and 15 international guests. It organized 150 workshops, and 30+ speaker sessions in the three-day period. It was attended by Pakistan’s top-notch tech start-ups, tech investors, and business professionals.

Vice Chancellors of Abbottabad University, Hazara University, The University of Haripur,  Pak Austria University also attended the tech summit on Day 3 and praised the activities held by the organizers.

Pak Austria University Vice Chancellor, Dr. Mohammad Mujahid, said, “the world is changing at a rapid pace. It is high-time that youth of Pakistan start understanding the dynamics and work for betterment of the society vis a vis tech-led growth.”

Web3 as the Emerging Tech

In a keynote session on Web3, Binance Growth Manager Hamza Khan presented the notion, ‘that such events should be of regular occurrence to develop an entrepreneurial mindset amongst the youth of Pakistan.’ Binance was also the Platinum Sponsor of the Tech Summit.

Hassan Nisar, Founder Metrix Tech Summit and the brain behind the conference, emphasized the importance of learning emerging technologies ‘as they are the only way forward to get out of our current financial situation’.

The summit saw a footfall of 30,000 attendees in total with day one having 18,000 attendees and day two having 12,000 attendees. According to officials organizing the summit, it was the ‘biggest tech summit’ of KPK in the Hazara region.

Metrix Tech Summit concluded with conferences on freelancing, cyber security, E-Sports, Women Empowerment Sessions, awards distribution ceremony, and workshops on Blockchain and Web3. The tech summit was aimed at reintroducing digital means of earnings with freelancing and ecommerce, and introducing emerging technologies like Web3, Metaverse, and Blockchain to govern these means.

A key highlight of the Metrix Tech Summit was freelancing awards. KPK has a whole ecosystem of freelancers that are working with companies and clients from around the globe. The event highlighted their efforts and awarded 20 freelancers that had achieved the most success.

The awards sections were distributed into: most favorite, most orders completed, and most profit earned on Fiverr and Upwork freelancing sites.

Metrix Tech Summit also offered a platform for startups called the ‘Idea pad’. The Idea Pad was a pitching competition for entrepreneurs. Interested entrepreneurs pitched ideas in front of judges that rated their pitches.

Cyber security problems have increased in the country in the past decade. The scale at which these problems are rising is unimaginable.

Rafay Baloch, World renowned Cyber Security Expert, talked about one such cyber security issue ‘Deep Fake’ and how it is influencing social media users. He also presented a presentation on the topic offering solutions to this issue.

Cyber Security Awareness conference aimed at spreading the knowledge that the current generation of Pakistan needs to tackle the cyber security challenges. EX DG FIA, Ammar Jafri, also presented his view regarding the growing cyber security issues and shared how the FIA is helping curb this problem.

The conference also included researchers and industry experts who shared their experiments and ideas to ensure that youth can understand the security dilemma and cope up with them.

To promote an enable environment for the advancement and growth of startups and early-stage businesses in the IT sector,

The workshop aimed to understand the technology ecosystem and how it impacts government policies and regulations. It offered solutions to accommodate innovative entrepreneurs that want to come up with actionable policy recommendations for the government.

Harmain Ghani, Executive Director of Pine Hills and the Co-Founder of Metrix, said that they aim to hold the tech summit next year as well. ‘The next tech summit would have three times more audience and activities,’ he added.