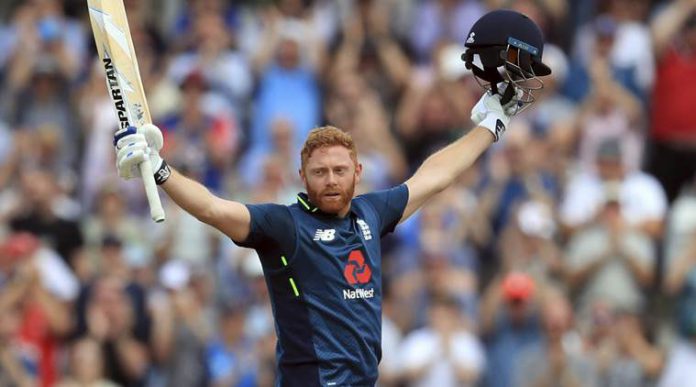 England creates history as they posted highest ODI score of 481-6, thrashing Australia by 242 runs at Trent Bridge to take a 3-0 lead in a five match series.

Alex Hales scored 147 runs and Jonny Bairstow played an innings of 139 runs, for the second time in two years at Trent Bridge. Bairstow´s hundred was his fourth in six ODIs while Hales´s century ended a run of low scores.

However, England captain Eoin Morgan became the country´s all-time leading run-scorer in ODI format during a 67 that featured a 21-ball fifty — England´s quickest in men´s ODIs.

This marks Australia´s biggest defeat at this level, in terms of runs, surpassing a 206-run loss to New Zealand in Adelaide in 1986.

England enjoys their biggest ODI victory as they topped their previous ODI best 210 runs success against New Zealand at Edgbaston in 2015.

Struggling to achieve 482 runs total, Australia was playing without their star batsmen David Warner and Steve Smith. Former Australia captain and his deputy were banned for a year due to ball tampering scandal in Cape Town. Australia was all out on 239 runs with 13 overs remaining.

England spinners Adil Rashid took four wickets for 47 runs and Moeen Ali took three wickets for 28 runs, with a mountain of runs behind them. Both English bowlers shared 7 wickets together.

England’s Alex Hales was declared the man-of-the-match on his Nottinghamshire home ground for scoring 147 runs.

For Australia, this was a disastrous eighth loss in nine matches at this level against England. Commenting on this devastating loss, England captain claimed, “That was extraordinary, some of the best striking I´ve seen, to be honest, so you´ve got to take your hat off to the England boys,” said Australia captain Tim Paine. “That’s as hard a day´s cricket as I´ve had in 16 or 17 years.”