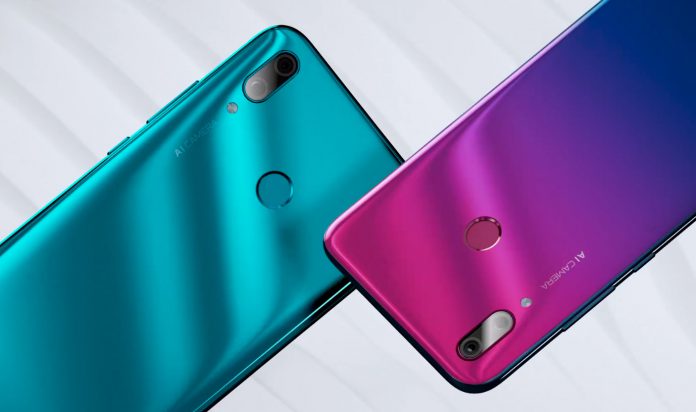 The long awaited Huawei Y9 2019 is now launched by the company.

Huawei Y9 2019 from the popular Y-series launched with several great features. It is launched with 4 cameras, with 2 on both front and back side. However, other specifications also make it a better mid range smartphone. However, Huawei Y-series mobiles are widely acknowledged for their amazing features within affordable price.

Huawei Y9 2019 has an octa-core HiSilicon Kirin 710 processor from Huawei, with either 4 GB RAM and 64 GB internal storage, or 6 GB RAM with 128 GB internal storage. The mobile phones also include expandable memory. For the operating system, the Y9 2019 runs Android 8.1 Oreo with Huawei’s exclusive EMUI skin.

The cameras at the back feature a 16 MP shooter with a 2 MP depth-sensing lens. In addition, it also has a true-tone LED flash and 1080p video recording. The front camera has a resolution of 13 MP while back camera is a 2 MP shooter.

The design accompanies thin bezels on the front alongside an notch at the best. For its showcase, the Y9 2019 highlights an expansive 6.5-inch Full HD+ IPS LCD panel, coming in at a 19.5:9 viewpoint proportion.

On the back, it includes on a level plane adjusted double cameras nearby a fingerprint scanner. The most remarkable viewpoint here is the slope outline, with two shading backs, accessible in essentially Blue/Green, Pink/Purple and, obviously, Black.

The battery here is an adequate 4,000 mAh unit, however, it likely doesn’t support quick charging.

Huawei Y9 2019 price in Pakistan is not confirmed yet. However, it will not cost much as it is a mid-range phone from Y-series.