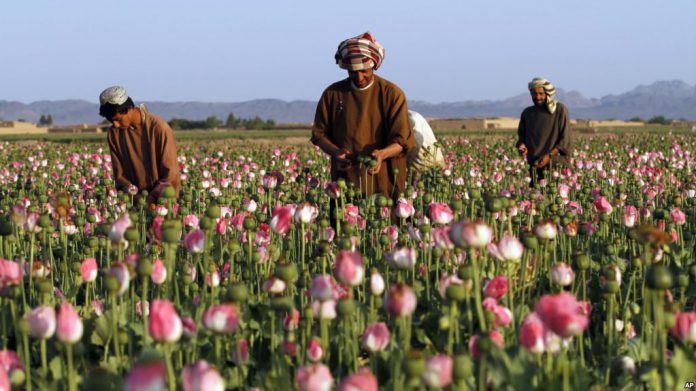 On Monday, Afghan opium producers are reportedly suffering from severe drought in the production this year. Excessive supply, along with output and prices are falling as the areas which are under poppy cultivation is shrinking.

According to the statistics in 2017, presented by the UN Office on Drugs and Crime, the value of opium is a source for funding the Taliban. However, poppy-growing farms are now falling 56 percent to $604 million.

This year’s potential opium production dropped 29 percent to 6,400 tons as the cultivation shrank by 20 percent and yields are falling.

Crops have failed on a huge scale across the northern and western Afghanistan due to the droughts, the report said.

“Opium poppy has become a crucial component of the Afghan economy that secures the livelihoods of many Afghans who engage in cultivation, work on poppy fields or partake in the illicit drug trade,” the report said.

Agricultural advance tools such as solar-powered irrigation systems, fertilizers, pesticides, may have also made opium production viable even “under unfavorable natural conditions and falling prices”.