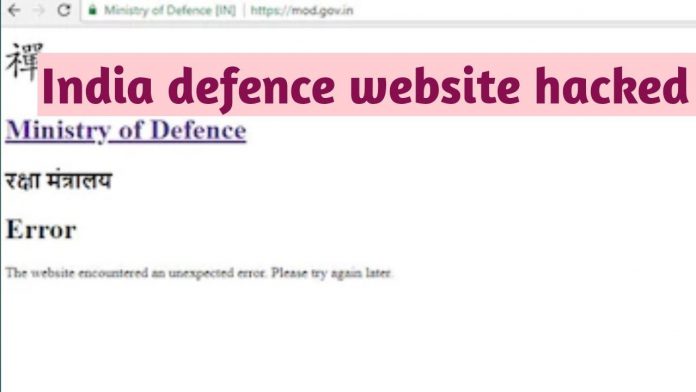 New Delhi: Indian Authorities were got shocked as their some crucial websites were hacked by Chinese hackers. According to sources, the website of Indian Defence Ministry was hacked on Friday. However, the website displayed a Chinese character that represents “home”. In addition, the hacked side also showed message “error” and asked users to “try again later”. The Indian Ministry has started an action to recover the website. According to Indian officials, people involved in the cyber-attack could be Chinese.

India under a Huge Cyber-Security Threat

Few days ago, a report was published which highlighted the issue of cyber-security in India. According to report, 22,000 Indian websites hacking incidents were reported between few months (April 2017 to January 2018). In addition, 114 government portals were hacked during that duration. K J Alphons, State Minister for IT and Electronics, said that Indian Computer Emergency Response Team (CERT-In) did a research on hacking incidents. However, their research revealed that during April 2017 to January 2018, 22,207 Indian websites were hacked including government websites. In addition, 493 affected websites were propagating malware on internet.

K J Alphons said that all new government applications and websites should be audited according to latest cyber-security standard before their hosting on servers. He further added that companies usually use servers to host applications and websites for provision of information and services to users. However, these servers are not properly configured and also possess vulnerable software that could be misused by hackers and cyber-criminals.