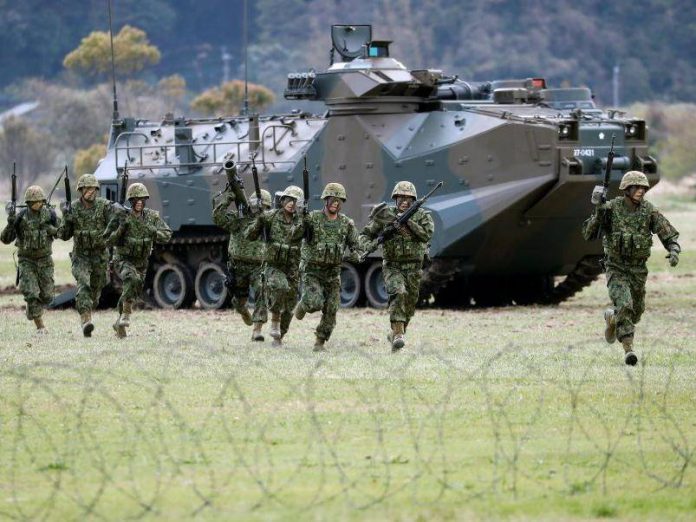 Sasebo: Japan has Initiated its first Marine unit since World War II to fight against invaders in the Japanese Islands on the edge of East China Sea. Tokyo thinks these islands are susceptible to an attack by the country of China. The ceremony for the initiation was held at a military base near Sasebo on the southwest island of Kyushu where about 1500 unites of the Amphibious Rapid Deployment Brigade were lined up wearing camouflage in the cold weather.

“Given the increasingly difficult defence and security situation, defence of our islands has become a matter of critical importance,” Tomohiro Yamamoto, vice defence minister, said during a speech addressing the ceremony. This unit is the latest addition to a growing marine force that includes helicopter carriers, amphibious ships, Osprey tilt-rotor troop carriers and amphibious assault vehicles that are for the purpose of deterring China as it pushes for access to Western Pacific.

According to the Article 9 of Japanese Constitution, which came into effect after World War 2, Japan Renounces War, however it has been building its military strength for the purpose of Self-Defense. But this does not sit well in with the people and some political parties in Japan, as having marine unit means Japan can threaten its neighbors, going against the Article 9.

China, which reigns the South China Sea, has outpaced Japan by three times in defence spending. China which claims a group of uninhabited islands in the East China Sea controlled by Japan, will spend 1.11 trillion yuan ($176.56 billion) on its armed forces in 2018.