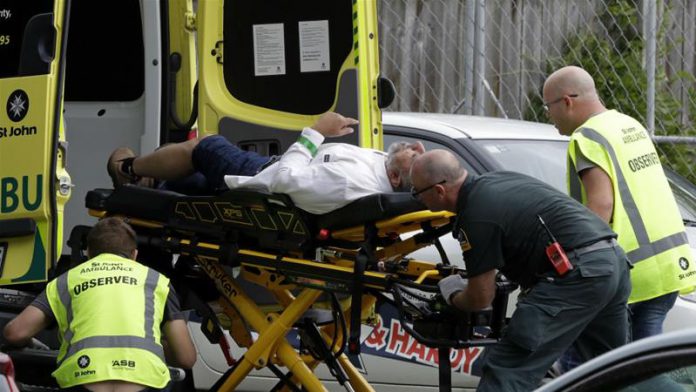 In New Zealand mosque attacks today, atleast 49 people are died. The firing was occurred at two mosques and it is unclear yet about the number of attackers.

Video footage widely circulated on social media, apparently taken by a gunman and posted online live as the attack unfolded, showed him driving to one mosque, entering it and shooting randomly at people inside. Worshippers, possibly dead or wounded, lay huddled on the floor of the mosque, the video showed.

New Zealand’s Police Commissioner Mike Bush said “as far as we know” multiple fatalities occurred at two mosques. Police had one person in custody but they were not sure if others were involved, and people should stay away from mosques.

The Bangladesh cricket team was arriving for prayers when the shooting occurred but all members were safe, team coach revealed.

Bangladesh team escaped from a mosque near Hagley Park where there were active shooters. They ran back through Hagley Park back to the Oval. pic.twitter.com/VtkqSrljjV

“We are in touch with our counterparts at the New Zealand Cricket Council and we have asked them to enhance security around our team,” Nizamuddin Chowdhury, the CEO of BCB revealed after the incident.

The Bangladesh Vs New Zealand test match was also called off due to the New Zealand mosque attacks. Bangladeshi cricketers also tweeted about the incident.

Alhamdulillah Allah save us today while shooting in Christchurch in the mosque…we r extremely lucky…never want to see this things happen again….pray for us

Entire team got saved from active shooters!!! Frightening experience and please keep us in your prayers #christchurchMosqueAttack