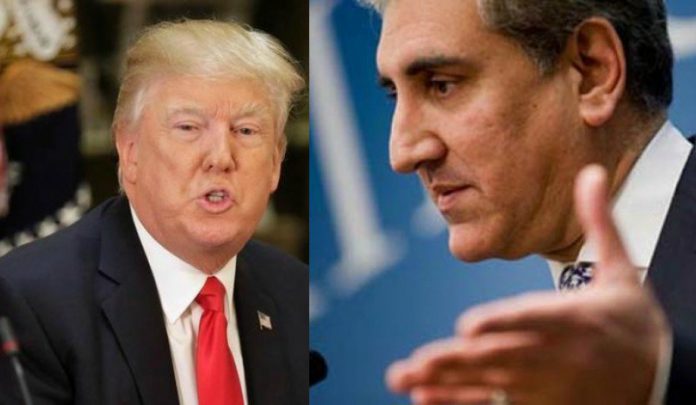 On Monday, Pakistan Foreign Minister Shah Mehmood Qureshi met US president Donald Trump at a reception that the US president held for world leaders – attending the 73rd installment of the UN General Assembly.

“I met with President Trump at the reception where I had the opportunity to discuss Pak-US relation with him. I requested him to rebuild the cordial relations that we have enjoyed in the past,” Qureshi said.

The foreign minister also stated that he discussed important matters related to both of the country’s relations, he said, “President Trump extended good wishes for Prime Minister Imran Khan.”

During the meeting, Qureshi apprised Trump of the historic Pak-US relations which needed to be re-phrased.

FM Qureshi revealed that he found President Trump’s attitude to be quite positive during the entire conversation, “President Trump agrees with the view and says that the United States intends to re-build the relations.”

Additionally, President Donald Trump was not the only one that Qureshi discussed matters with. In fact, he also got to meet the US Secretary of State, Mike Pompeo at the reception who expressed goodwill for Pakistan. Pompeo and Qureshi also met in Islamabad earlier this month for their first official meeting.

Mike Pompeo is the first foreign minister to personally congratulate and reach out to the newly elected prime minister, Imran Khan. During the discussion, Secretary Pompeo stressed on two major issues: Pakistan’s support for a US-led move to jump-starting the Afghan peace process and joint efforts to revive once close ties between the two states, the sources claimed.

According to Qureshi, Pompeo also sent his regards to the Prime Minister of Pakistan.

Foreign ministers Qureshi and Pompeo, are both set to schedule another meeting on the 2nd of October in Washington.

Foreign Minister Qureshi also is set to address the UN General Assembly on the 29th of September.