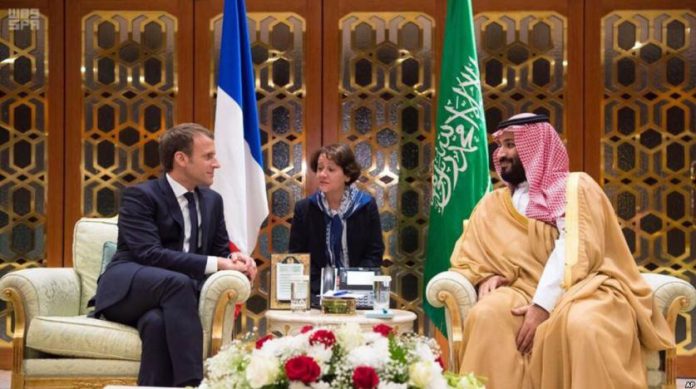 Paris: Crown Prince of Saudi Arabia arrives in France Sunday as a part of his international tour. His Royal Highness aims at reshaping his kingdom’s outlook overseas through process of transformation from conservative to modern state. Prince Mohammed bin Salman is on two-day official tour to France.

Saudi Prince’s world trip also includes a coast-to-coast tour of the United States, Britain and Egypt, where he wooed multi-million dollar deals, ranging from defense to entertainment. French and Saudi organizations are all set to sign 14 official agreements in energy, tourism, agriculture, and culture. Highly anticipated Franco-Saudi cooperation deal for the development of Saudi city Al Ula, gifted with archaeological fragments, is also expected to be the main highlight of the visit.

Apart from French President, Saudi Crown Prince is all set to meet French Prime Minister and trade officials. Moreover, a visit to the Paris-based tech startup campus Station F and a concert in southern Aix-en-Provence, is also on the visit list.

According to President Macron’s office the trip focuses on investment in the digital economy, renewable energy, and the oil-rich Saudi Arabia is keen to invest billions of dollars in the sector.

This is Crown Prince Mohammed’s first visit to France as the heir to the Saudi throne after an unrestrained period at home. The 32-year-old prince has showcased the world the modern face of Saudi Arabia with their current reforms like lifting ban from women driving, mixed gender concerts, opening of cinemas. The young prince is seeking to rebrand Saudi Arabia from a fundamentalist kingdom to a modernist oasis.

Saudi officials sees strong ties between Prince Mohammed and President Macron, as both young leaders undertaking challenging in their countries.