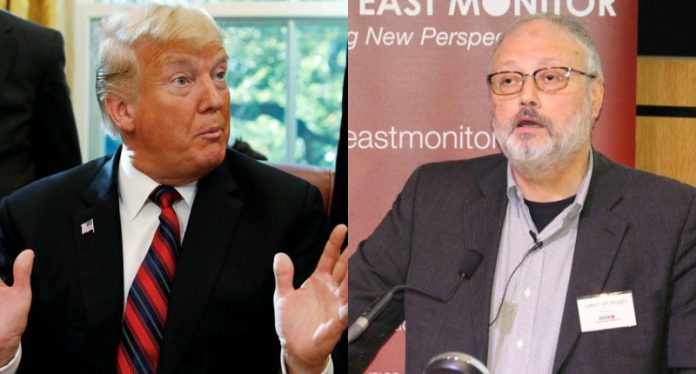 On Tuesday, the United States said that it was working on revoking visas of Saudis who were suspected to be involved in the murder of Journalist Jamal Khashoggi. After Saudi Arabia released their statement on the journalist’s death, President Donald Trump ridiculed the kingdom’s reply as “one of the worst cover-ups” in history.

The move came to surface when Turkish President, Recep Tayyip Erdogan, revealed that Khashoggi’s killing happened inside the Saudis’ Istanbul consulate. The murder was reportedly had been planned, in a speech that overshadowed a long-planned investment forum in Riyadh.

Saudi leaders have denied involvement in the killing, pushing responsibility down the chain of command.

According to President Trump, the Crown Prince Mohammed bin Salman “strongly said that he had nothing to do with this, this was at a lower level.”

“It was carried out poorly and the cover-up was one of the worst in the history of cover-ups,” Trump added.

The United States have already penalized 21 visas of the suspected individuals in the murder case.

“These penalties will not be the last word on this matter from the United States,” said the Secretary of State Mike Pompeo.

“We are making very clear that the United States does not tolerate this kind of action to silence Mr Khashoggi, a journalist, through violence,” he said.

This was the first US action taken against the Saudis which came just after three weeks after Khashoggi, and following contradictory statements by Trump, who has ruled out major steps against the Arabian country which involves cutting arms sales to the major defense partner.

Dozens of questions still remain unanswered as Saudi Arabia stays quiet in the additional details related to the matter.