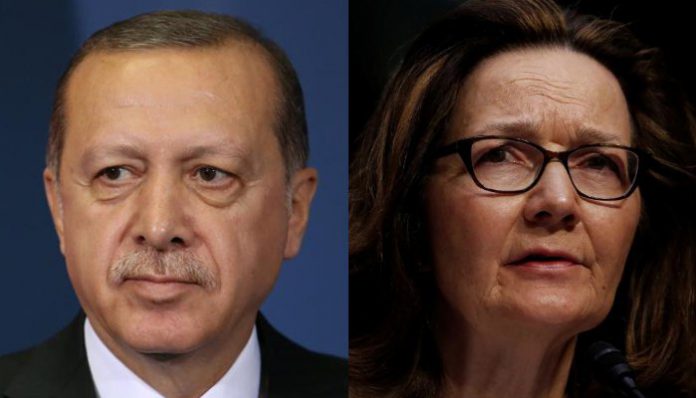 On Wednesday, the Turkish intelligence shared “all the evidence” found by the Turkish investigators over the Khashoggi murder case. The evidence for the death of the Saudi journalist, Jamal Khashoggi, was claimed to be shown to the CIA chief during a visit.

On Tuesday, the CIA Director Gina Haspel visited Ankara – the Turkish capital – for talks with Turkish officials on the killing of Washington Post contributor Khashoggi inside the Saudi consulate in Istanbul.

During the briefing at the Turkish Intelligence Organisation (MIT), video images and audio tapes, along with evidence were gathered from the consulate and the consul’s residence, and were shared with Haspel, sources reported.

Turkish President, Recep Tayyip Erdogan, has halt pointing the blame at the Saudi leadership for the death of the Saudi critic.

On Tuesday, he said that the murder was carefully planned, and demanded the involved to face punishment.

On October 2, Jamal Khashoggi, 59, went missing after entering the Saudi mission to obtain documents for his upcoming wedding.

On Wednesday while speaking at a ceremony in Ankara, Erdogan on promised that Turkey will not tolerate the culprits to get away with their murder.

“We are determined not to allow any cover-up of this murder and for all those responsible from those who gave the command to those who executed it — not to escape justice,” he said.

“We are not implicating anyone. Ankara would be as transparent as it gathers more evidence that shed light on the dark sides of the murder,” he added.

He further added that, “It is not over yet. We are unraveling, dismantling (the case) and the world is closely following.”

The whereabouts of Khashoggi’s corpse still remain a mystery.

On Tuesday, the police found an abandoned car which had belonged to the Saudi consulate in an underground car park in the Sultangazi district of Istanbul.

According to the US President Donald Trump, the Crown Prince Mohammed bin Salman “strongly said that he had nothing to do with this, this was at a lower level.”

The US President added that he spoke to the crown prince and his father King Salman on Monday.