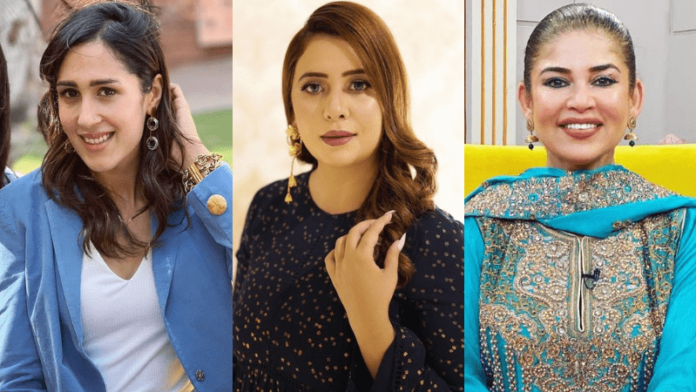 On Tuesday morning walkout by TV anchor Rabia Anum Obaid from Nida Yasir’s morning show has divided the internet and many famous people. Actors Mishi Khan and Mira Sethi fiercely criticized and defended her choice to leave since Mohsin Abbas Haider, accused of assaulting his ex-wife.

She informed the Aroosa star on Twitter that “it’s called a protest” and that what Obaid did was not offensive. In reaction to Khan’s tweet, Sethi said on Thursday, “What Rabia Anum did was not in ‘poor taste. She excused from a live performance and would not share a room with an domestic abuser. It’s known as a protest. And it has far more impact than sneaking out of the cosmetics area subtly.

Khan described Obaid’s action as a “cringe.” Although she acknowledged that it’s admirable to stand up for what one believes in. She asserted that the manner the TV presenter left the stage was “not the way to shame and humiliate people in a live event.”

“You had ample time to walk out before going live rather than this awful move,” she wrote. Shortly after Sethi criticized Khan, the veteran star took to Instagram and said, “Thank you Mira Sethi for your response. I respect your opinion but I [will] stick to mine that it was in bad taste. You know if someone like that [Haider] has come on a show, someone whom you’ve stood up against, you can walk out before and it’s still called a protest.”

She said, “You had plenty of time to walk out before going live rather than this dreadful act. Khan responded to Sethi’s criticism of him by posting on Instagram, “Thank you Mira Sethi for your reaction. Although I appreciate your viewpoint, I will continue to hold the view that it was offensive. You are aware that you may leave a program if someone like [Haider] is on it and you have already protested against them.

She continued by saying that if Obaid wants to advocate for domestic abuse. For example, or anything else. she must denounce and maybe even protest everyone who has broken the law. She said, “You cannot degrade just one individual.

There are some mistakes we make that never leave us. But I’m not going to make that mistake today, Obaid said. I have a position on a subject, domestic abuse, and I feel compelled to take action. If tomorrow’s tiny action will save my daughter or even some of my friends.