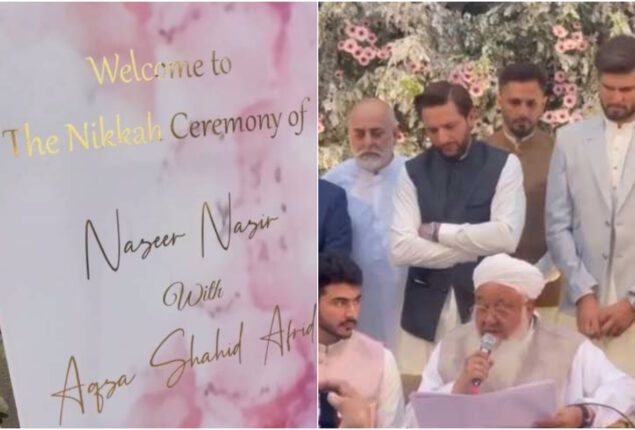 The wedding of Shahid Afridi’s oldest daughter Aqsa brings December to a close. The Afridi family arrived on Friday to celebrate their daughter’s marriage to Naseer Nasir in Karachi, capping off the year with joy.

On December 30, 2022, Aqsa and Naseer Nasir exchanged vows in a private nikah ceremony in Karachi. Along with Shahid’s family and close friends, Shaheen Shah Afridi attended the celebration.

On the e-invite for the wedding were making rounds on social media. The pair were dressed in attire with white and yellow accents in the cards.

The news of Shaheen’s nuptials to Shahid’s second daughter Ansha broke just ten days ago, and the plans are set. However, The nikah ceremony for Shaheen and Ansha will take place in Karachi on February 3 before the commencement of the upcoming Pakistan Super League season, according to a source close to the Afridi family. The insider also said that the remaining events take place later.

In a tweet from the previous year, Shahid responded to rumors regarding the fast bowler’s relationship with his daughter.

“Shaheen’s family approached my family for my daughter. Both families are in touch […] matches are made in heaven, if Allah wills this match will be made too.”