U.S. Embassy Nominates Amna Baig for Prestigious Award as Part of the 16 Days Against Gender Based Violence Campaign 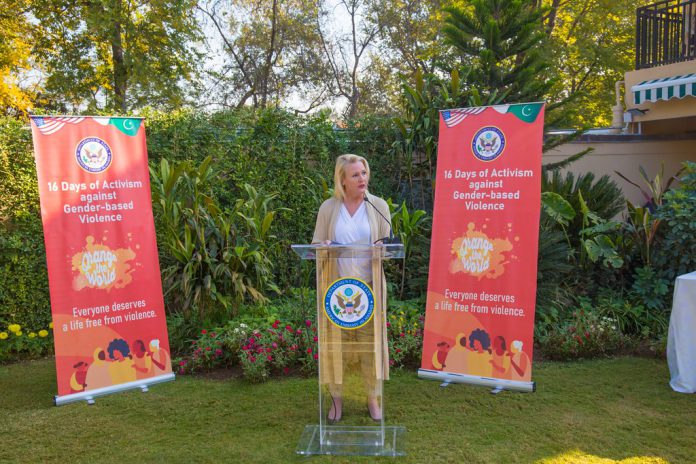 Islamabad, December 9, 2021: U.S. Embassy Charg daffaires Angela P. Aggeler hosted an event to mark the 30th anniversary of the 16 Days Against Gender Based Violence campaign. The guest of honor was Assistant Superintendent of Police Amna Baig, an Islamabad-based police officer in charge of the law enforcements Gender Protection Unit – a government initiative to facilitate women and transgender individuals in their fight against discrimination and injustice.

Even though gender-based violence is pervasive, it is not inevitable, Charge daffaires Aggeler said at the event. It can and must be prevented.  This is why we take this time each year to reinvigorate our efforts against gender-based violence and to call for greater collective and individual action to prevent and respond to all forms of violence against women.

She added that it was in this spirit that the Embassy nominated Assistant Superintendent Baig for the 2022 U.S. Secretary of States International Women of Courage Award, which recognizes women from around the globe who have demonstrated exceptional courage and leadership in advocating for peace, justice, human rights, gender equality, and womens empowerment.  In its nomination, the Embassy noted that Assistant Superintendent Baig serves as a role model for young Pakistani girls to pursue their dreams despite the obstacles they may face.

The U.S. Mission takes an active role in the Global 16 Days Against Gender Based Violence Campaign every year, and this year was no exception.  Amongst the many activities across the country, the U.S. Mission sponsored a virtual photo exhibit of heroes who have made Pakistan a safer society for women, a martial arts training program with girls, a film series in collaboration with the Dastak organization, and a student poster competition to promote a future free from gender-based violence.

The Global 16 Days Against Gender Based Violence Campaign began in 1991.  Today over 6,000 organizations in approximately 187 countries have participated in the Campaign, reaching over 300 million people.  The spirit of the original campaign remains as relevant today as it did in 1991, as gender-based violence remains a threat to peace, stability, and economic growth worldwide.