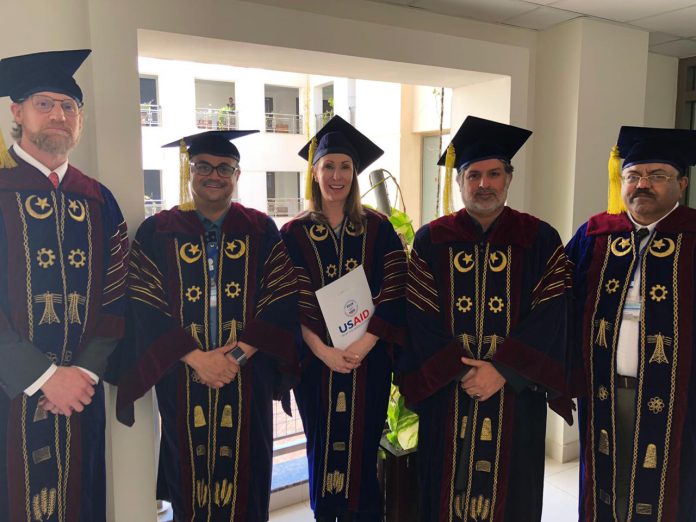 Karachi –  Future Pakistani engineers and technicians in water science received their degrees today during the graduation ceremony at the Center for Advanced Studies in Water, thanks to a program funded by the United States Agency for International Development (USAID).

USAID Mission Director Julie Koenen joined Minister for Mines and Mineral Development Mir Shabir Ali Bijarani in handing out degrees and medals to the graduating class at the convocation ceremony at Mehran University of Engineering and Technology (MUET) in Jamshoro. These 80 Master’s and PhD graduates are among the students who also participated in exchange visits at the University of Utah in the United States under the program funded by USAID.

“We believe Pakistan needs its youth and entrepreneurs to focus on solving the country’s challenges,” Mission Director Koenen said. “Partnerships and collaboration between the private sector, academia, and government are the way forward. The young emerging innovators like the ones graduating today, need to lead Pakistan’s journey in this critical sector.”

The provincial minister Bijarani expressed his appreciation for USAID support and thanked the people of the United States for supporting education and health projects in the province.

This program at Mehran University is one of the research centers the United States Government established in 2014 to support Pakistani universities under the U.S. Government’s $127 million program (PKR 17.75 billion). The program supported research for innovative solutions to Pakistan’s water, energy, and food security challenges. It also resulted in deeper U.S.-Pakistan ties: Mehran University and the University of Utah have signed a memorandum of understanding to continue the partnership for the next five years.

For more information about USAID’s support in the education sector in Pakistan, please click here: www.usaid.gov/Pakistan