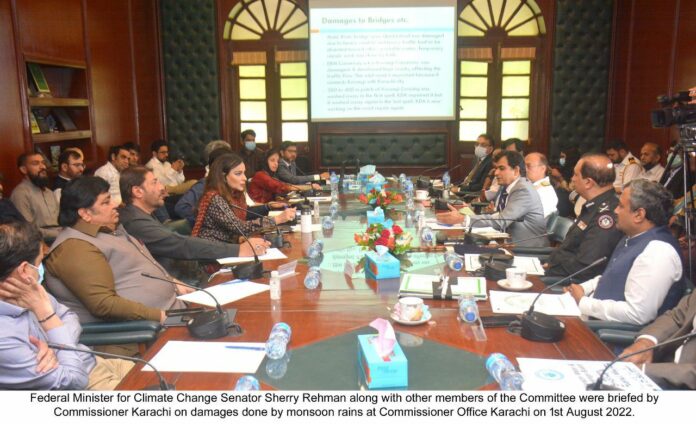 The committee was on the visit to different cities of Sindh province and will compile the report on the damages caused by the recent rains in the province, she added. We have three days to do this job and on the fourth day, we have to submit the report on the damages occurred in the province and the government would devise the policy to compensate the losses done to the people here, the federal minister told. She said that there were some remote areas in the province where the media could not reach and we were going there and would meet the people. Besides, the PDMA and other agencies are working to provide the food and other support to victims affected by the recent rains.

The proportion of monsoon rains in Balochistan was 625% higher than the average of the last 20 years, while that of Sindh stood at 501%, she added. She asked that all departments in the province should work together to serve the people in the province. Speaking on the occasion, Federal Minister for IT Syed Aminul Haque told that the sewerage system in the metropole city had collapsed and so, the government should take this issue seriously. Besides, the government should provide more facilities to the departments because they needed more machineries to cope with the situation after the recent rains, the Haque uttered. Earlier talking in the meeting held with commissioner Karachi and other officials, Sherry Rehman said that the short, medium and long term plans will be formulated in the light of recommendations of the committee.

The federal government will extend full cooperation to the provincial governments to cope with the impact of the natural calamity, she assured. The national and provincial disaster management authorities should ensure implementation of disaster risk management strategy, federal minister further added. She reiterated that the survey should be conducted to assess the damages caused by rainfalls as the losses could be compensated. Appreciating the performance of local administration, she added that the local administration was doing its job efficiently.

Administrator Karachi, Sindh government’s Spokesman and CM Advisor on Law Barrister Murtaza Wahab informed the meeting that the underpasses had been inundated in the city and the standing water had been drained out. Moreover, the water had been pumped out from the other area of the metropole and the issues of citizens affected by the rains are being addressed, he mentioned. The meeting was told that the survey would be conducted and the report on total losses done to the people would be compiled and later, the report would be presented to the committee. On the occasion, Kesoo Mal Kheeal Das, Syed Ghulam Mustafa Shah and Mir Amer Ali Khan Magsi also spoke on the occasion. Later, the committee and officials of Karachi division visited the different areas of city including Tower, Korangi River and other areas.